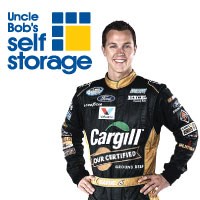 “Trevor truly enjoys meeting his fans and they clearly enjoy meeting him,” said Jason Deem, Area Manager of Uncle Bob’s Montgomery storage facilities. “We know our customers love racing and are excited about the big race coming up, so we’re thrilled to have a driver like Trevor come visit us.”

Trevor’s appearance comes just days before the series race in Talladega. Trevor’s first attempt there ended abruptly, so he will look to complete and win the race for the first time in his career.

“Talladega is always unpredictable but I’m looking forward to it, especially after last year,” Trevor said. “I’m feeling good and am excited for what I think the team will be able to accomplish.”

In addition, attendees can register to win tickets to the race in Talladega the following weekend. Food, prizes and games will be also on hand. For further details, please visit UncleBobs.com/Bayne.

Trevor Bayne is an American NASCAR Sprint Cup Series and Nationwide Series race car driver. He is known for driving the No. 21 Motorcraft/QuickLane Ford Fusion for Wood Brothers Racing in the Spring Cup Series, and the No. 60 Ford Mustang for Roush Fenway racing in the Nationwide Series. In 2011, Bayne won the Daytona 500 at Age 20 and became the youngest driver ever to do so.

About Uncle Bob’s Self Storage