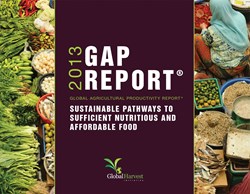 The Global Harvest Initiative report finds significant differences in the rate of productivity growth depending on per capita gross national income and recommends country-level policy changes.

“The overall findings of the 2013 GAP Report indicate that over the past decade, countries are managing to maintain growth in productivity on global average. But those findings should not downplay the serious and urgent fact that we must maintain an increasing rate of global agricultural productivity year after year for the next 40 years.” said Dr. Margaret Zeigler, GHI executive director.

“The 2013 GAP Report shows that raising productivity across all regions requires long-term investments and sustained focus if we are going to have sufficient nutritious and affordable food and agriculture.” Zeigler continued, “To more sustainably increase output from every resource we use for food production, we need greater investment in agricultural research and development, better trade agreements for facilitation of global and regional trade in agriculture, and a commitment to apply information and science-based technologies.”

For the first time, the 2013 GAP Report includes case studies that demonstrate the impact of five policy areas critical for meeting the food and nutrition needs of the future, including reducing trade barriers, promoting public- and private-sector investment, increasing investments in research, and coordinating international development assistance. Together, these policy areas help drive greater efficiency and productivity along agricultural value chains.

About The Global Harvest Initiative
The Global Harvest Initiative (GHI) is a private-sector voice for productivity growth throughout the agricultural value chain to sustainably meet the demands of a growing world. Since its establishment in 2009, GHI has been focused on the importance of agricultural productivity for global food security, and since 2010, GHI has released its signature GAP Report®, an annual benchmark of the global rate of agricultural productivity. GHI’s growing membership includes DuPont, Elanco, IBM, John Deere, and Monsanto. Visit us at http://www.globalharvestinitiative.org, Twitter @Harvest2050 http://twitter.com/#!/harvest2050, and Facebook http://www.facebook.com/GlobalHarvestInitiative.
###