Over one hundred conservatives gathered at the Latino Voter Outreach - Midwest Conference to discuss a renewed commitment to reach out to the Latino community in 2014. The conference featured Rachel Campos-Duffy, members of the Republican National Committee and Republican Party of Minnesota. 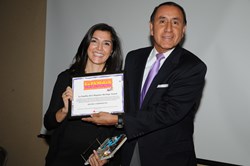 “Conservatives need to adjust their message and tone when talking to Latinos. Convince a mother and you can win a family,” remarked Rachel Campos-Duffy.

Over one hundred conservatives gathered this past Saturday in the West Side neighborhood community in Saint Paul to discuss a renewed commitment to reach out to the Latino community in 2014 at the Latino Voter Outreach - Midwest Conference. Minnesota Republican elected officials, including Republican Party of Minnesota Chair Keith Downey, candidates from key races throughout the State, and representatives from the Republican National Committee (RNC) attended the conference.

“The Midwest Conference was a fantastic event. I credit Rick for all of his hard work. When my grandparents came to America they were looking for freedom and liberty, not entitlements. It is now my turn to fight for the America I want for my children, a place where hard work, perseverance, and personal responsibility can grant you the American dream,” remarked Rachel Campos-Duffy. “Conservatives need to adjust their message and tone when talking to Latinos. Convince a mother and you can win a family. Our party needs to hit the streets, doors, and phones and have those one-on-one conversations and make the case for conservative ideas.”

The Latino Voter Outreach Conference was organized by Rick Aguilar. After the 2012 elections; he made a personal commitment to help conservatives reach out to the Latino community.

“There is so much awareness of the importance of the Latino vote to all future elections, so we were pleased to have a great turnout of GOP leaders who came together at this conference, to gain insights of Latino issues and to have a discussion with Latino community members,” stated Rick Aguilar. "Rachel Campos-Duffy delivered a great message of economic liberty, self-reliance and opportunity that she is expanding across the country to the Latino community - it was great to have her with us.”

Other key conservative leaders attended the conference and made commitments to help in the outreach to diverse communities. Hennepin County Sheriff Rich Stanek participated in the panel discussion.

“I was inspired by the efforts on Saturday to reach out to the Latino community. I will personally help bridge the outreach to the diverse community in Hennepin County for conservatives that want to take action,” stated Sheriff Rich Stanek.