More than 229 GranuFlo lawsuits allegedly stemming from an FDA Class I recall contend GranuFlo and NaturaLyte dialysis drugs caused patients to experience life-threatening heart side effects, including heart attack, stroke and sudden cardiac death, have been filed in the U.S. District Court, District of Massachusetts. 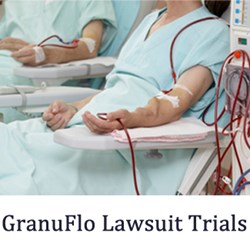 Wright & Schulte is offering free GranuFlo lawsuit consultations to those who may be eligible to a GranuFlo recall claim. Visit yourlegalhelp.com or call 1-800-399-0795 today

Wright & Schulte is offering free GranuFlo lawsuit consultations to those who may be eligible to a GranuFlo recall claim. Visit yourlegalhelp.com or call 1-800-399-0795 today

More than 229 GranuFlo lawsuits pending in the U.S. District Court, District of Massachusetts, are moving into the discovery phase, Wright & Schulte LLC reports. According to an Order issued by Judge Douglas P. Woodlock on October 1st, Generic Requests for Production and/or Interrogatories are due by October 28th. Written responses are due by January 6, 2014, at which time document production will begin, as will the process for selecting specific GranuFlo and NaturaLyte recall lawsuits for the litigation’s first bellwether trials. According to Wright & Schulte LLC,GranuFlo bellwether trials are intended to weigh the strength of plaintiffs’ claims, and could provide clues as to the outcomes of similar Granuflo and NaturaLyte lawsuits. (In re Fresenius GranuFlo/NaturaLyte Dialysate Litigation, MDL No. 2428).

GranuFlo, a powder, and NaturaLyte, a liquid, both involved in a 2012 FDA Class I recall, are dialysis concentrates that neutralize acid in the blood, a task that failing kidneys of dialysis patients are unable to accomplish. Both are marketed by Fresenius Medical Care, which according to The New York Times, is the country’s largest supplier of dialysis products and services.
[nytimes.com/2012/06/15/health/fda-investigates-
fresenius-for-failure-to-warn-of-risk.html?_r=0, New York Times, Dialysis Company’s Failure to Warn of Product Risk Draws Inquiry, June 15, 2013]

According to court papers filed in GranuFlo lawsuits, many doctors administering GranuFlo and NaturaLyte were not aware until the GranuFlo recall that the drugs contain more of an ingredient the body converts to bicarbonate than other products used for this purpose. If this difference wasn’t accounted for when the drugs were prescribed, dialysis patients were at risk of suffering a condition called metabolic alkalosis, which is associated with the occurrence of sudden, serious heart problems.

In March 2012, Fresenius Medical Care reported the serious risks associated with GranuFlo and NaturaLyte in an Urgent Product Notification that it sent to dialysis clinics throughout the country. By June 2012, the U.S. Food & Drug Administration (FDA) had determined that the danger posed by GranuFlo and NaturaLyte was serious enough to warrant it’s most urgent safety warning, and Fresenius’ March Notification was given Class I status Recall. According to the FDA, inappropriate dosing of GranuFlo or NaturaLyte can cause bicarbonate in the blood to rise to dangerous levels, resulting in metabolic alkalosis, and potentially:

GranuFlo lawsuits allege that Fresenius Medical Care had been investigating the heart problems associated with GranuFlo and NaturaLyte long before the GranuFlo recall was announced. Among other things, plaintiffs point out that the company issued a memo to its own dialysis clinics in November 2011, warning doctors to adjust the dosage of GranuFlo to avoid metabolic alkalosis and associated side effects. Among other things, the memo revealed that 941 patients treated at Fresenius dialysis centers had experienced cardiac arrest during 2010, and that elevated bicarbonate levels were associated with a significant increased risk of cardiac arrest. GranuFlo and NaturaLyte lawsuits question why this important information was withheld from thousands of dialysis clinics outside of the Fresenius network that also used GranuFlo and NaturaLyte to treat patients.
[graphics8.nytimes.com/packages/pdf/business/fresenius-memo.pdf, Fresenius Medical Care Memo, March 29, 2013]

Dialysis patients or their surviving family members may be eligible to file a GranuFlo lawsuit if they suffered a sudden, serious heart problem during or after a dialysis treatment that involved the administration of GranuFlo or NaturaLyte. Wright & Schulte LLC is offering free legal consultations to anyone interested in filing a GranuFlo recall claim. To learn more about GranuFlo lawsuits, or to arrange for a free legal consultation, please visit yourlegalhelp.com.

About Wright & Schulte LLC
Wright & Schulte LLC, an experienced personal injury firm, is dedicated to the belief that America’s legal system should work for the people. Every day, the attorneys of Wright & Schulte LLC stand up for the rights of people who have been injured or wronged and fight tirelessly to ensure that even the world’s most powerful corporations take responsibility for their actions. If you’re looking for a law firm that will guarantee the aggressive and personal representation you deserve, please do not hesitate to contact Wright & Schulte LLC today. Free GranuFlo lawsuit case evaluations are available through yourlegalhelp.com or by calling 1-800-399-0795.