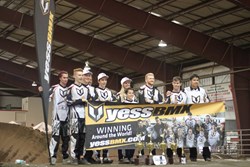 “We were very pleased with the turnout,” said Brad Hallin, Senior Track Director. “The BMX Canada Grand National continues to grow and has become the premiere event of the year for BMX racers in Canada.”

“We were very pleased with the turnout,” said Brad Hallin, Senior Track Director. “The BMX Canada Grand National continues to grow and has become the premiere event of the year for BMX racers in Canada.”

Mayor Sharon Gaetz was on hand to welcome the crowd to the City of Chilliwack. Members from tourism Chilliwack also were on hand and noted that all hotels were full and restaurants were calling in extra staff to deal with the participants and families that had traveled for the event.

BMX racing began Friday and concluded with the Grand National on Sunday. With titles up for grabs in classes ranging from 5 & under, to 61 & over, the competition was exciting throughout the weekend. YESS BMX, the tours presenting sponsor, had great representation at the event and walked away with 4 titles. The YESS team won the Factory Team title and had individual titles captured by three of their riders.

In the professional class, James Palmer (North Vancouver, BC) captured the overall title, but it was the “Mini Cooper” Kristian Cooper (Grants Pass, Oregon) who would capture the top spot on the podium both Saturday and Sunday. Palmer and his YESS bicycle were on the podium each day to claim the title of BMX Canada #1 Pro.

In the Boys/Mens Cruiser Class, 13 year-old Ayden Houle (Nanaimo, BC) would stand on top of the podium and also capture the title of BMX Canada #1 Cruiser. Houle would also be on the podium in the 13 year-old expert class.

The top amateur spot for the overall BMX Canada title would go to 15 year-old Alex Tougas (Pitt Meadows, BC). Tougas and his YESS bicycle won the 15 expert class and allowed him to repeat as the top amateur for 2013.

With thousands of entries throughout the season, travelers from around Canada and the United States, and a seven race series that culminated this past weekend at Heritage Park in Chilliwack, the 2013 BMX Canada season comes to a close. Plans for 2014 are being finalized and it is sure to be another exciting year.