"Jordans Under Dickies" by Dirty Rotten Skoundrelz featuring Bun B is available now for download on iTunes and Amazon. 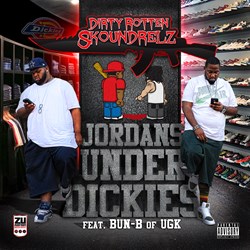 Adding Bun B to the song really puts a stamp of approval and legitimizes Don Claude and Big Suave as artists, says Jonathan Scott, the CEO of Zu Nation Media Group.

Zu Nation Media Group, an integrated music and media company based in Dallas, Texas, has just released the new single and music video by their talented rap duo Dirty Rotten Skoundrelz entitled “Jordans Under Dickies”, which features legendary rapper Bun B of UGK. The dynamic duo, Dirty Rotten Skoundrelz, consists of members Big Suave and Don Claude. Their single “Jordans Under Dickies” can be described as a feel good song, that is perfect for the airwaves, that will be felt by the masses. Over a head-nodding, banging, quality track, the duo unleashes lyrics that pay homage to two of their must-have fashion items; Nike Jordan shoes under Dickies brand pants or shorts. “Jordans Under Dickies” was produced by cutting edge producers, The Anti-turrdz, who consists of members C.G. of Manipulative Musicc, and D. Hall, of Mr. Nice Guy Productions. Jonathan Scott, the CEO of Zu Nation Media Group, says, “Adding Bun B to the song really puts a stamp of approval and legitimizes Don Claude and Big Suave as artists."

Distributed by Empire Distribution, the single, “Jordans Under Dickies”, is available for digital download on major online retail websites and the video featuring Bun B can be viewed on YouTube.com. It is available on iTunes at
https://itunes.apple.com/us/album/jordans-under-dickies-feat./id725855954?ls=1.

Zu Nation Media Group is gearing up for a big push and strong marketing campaign to promote their single and upcoming projects. The online, social media, radio, and TV music video campaign for “Jordans Under Dickies” has just begun. There is more to come from the Dirty Rotten Skoundrelz – stay tuned!

About Dirty Rotten Skoundrelz:
Fuse the aggressive nature of N.W.A, the lyrical ability of Outkast, the southern soul of UGK, the consciousness of Public Enemy, and the raw, uncut energy of Three Six Mafia, and you will have the underground’s greatest hip hop tandem, Dirty Rotten Skoundrelz. Members Big Suave “The Mayor of Oak Cliff TX.,” and Don Claude, “The Pride of The Projects,” – are backed by cutting edge producers, The Anti-turrdz. Dirty Rotten Skoundrelz’s new single “Jordans Under Dickies” single featuring the legendary rapper Bun B of UGK is available for digital download now on all major online retailer websites. The music video featuring Bun B can be seen on YouTube.com. Their forthcoming project "Skoundrel Musik", is scheduled for release first quarter of 2014 and will feature the single, “Jordans Under Dickies” featuring the legendary Bun B of UGK. Other upcoming projects include "Skoundrel Nation" and "Skoundrel Life".

About Zu Nation Media Group:
Zu Nation Media Group is an integrated music and media company based in Dallas, Texas. ZNMG was founded by Jonathan R. Scott – a professional athlete, music junkie, entrepreneur, and young philanthropist, and a few of his business partners Cleveland R. Gay, Marcus R. Dade, and Damon A. Hall. ZNMG is a thriving company with a deep passion for creating and igniting an impactful music movement with their talented roster of incredibly gifted vocalists, rappers, producers, and engineers. Zu Nation Media Group was created to revolutionize the manner in which media is distributed, marketed, and consumed for the 21st century. Specializing in maximizing their talent roster and resources to produce first rate media across all genres and platforms is the primary goal for the company's success; while striving to be one of the world's leading independent labels of this generation. ZNMG aims to deliver to fans timeless music that will make their media group a household name.