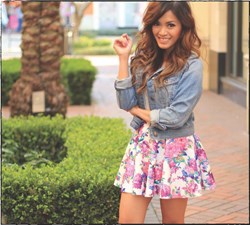 YouTube influencer, ThatsHeart has over 1 Million followers on her social media channels.

We are thrilled to be launching collections with ItsJudyTime and ThatsHeart,” said Fred Sadovskiy, BH Cosmetics co-founder and CEO. “BH Cosmetics owes much of the credit for its success to its large YouTube following.

BH Cosmetics, a beauty leader and creator of high-quality makeup palettes today announced its first partnership with popular YouTube personalities, ItsJudyTime and ThatsHeart. BH Cosmetics will create custom signature palettes for the YouTube stars. Both of the personalities are influential vloggers with millions of subscribers across multiple social media channels.

"We are thrilled to be launching collections with ItsJudyTime and ThatsHeart,” said Fred Sadovskiy, BH Cosmetics co-founder and CEO. “BH Cosmetics owes much of the credit for its success to its large YouTube following. This unique partnership will allow us to continue our growth and our strategy to capitalize on the popularity of social media influencers.”

BH Cosmetics has been placed on Inc. magazine’s 2013 Inc. 500 list, which recognizes the country’s fastest-growing private companies. According to Inc. magazine, to reach this distinction, a company had to grow more than 918 percent from the start of 2010. The average company on the list grew 2,900 percent. BH Cosmetics is ranked at 446 on the list.

“It wasn’t just the use of YouTube as a marketing channel that was unique in BH’s early days, but also the company decision to use stars endemic to the platform,” wrote Michael Carney of PandoDaily in a September 2013 story about BH’s rapid growth and the power of online brand building. “Rather than going outside of YouTube to hire traditional celebrities or even actors to promote its brand, the company was one of the first to team up with early YouTube stars to make videos that would tap into their existing audience.”

The creation of signature influencer palettes is the next evolution of growth for BH Cosmetics. Both ItsJudyTime and ThatsHeart palettes will be available for the 2013 Holiday shopping season.

BH Cosmetics is a creator of high-quality, affordable makeup palettes and brushes. Known for its highly pigmented, vivid shades of color, its product line has evolved from its flagship 120-shade box of eye shadows to a full line of products for eyes, lips and cheeks, as well as brushes. YouTube influencers frequently use the products. BH Cosmetics was recognized on Inc. magazine’s 2013 Inc. 500 list as one of the country’s fastest-growing private companies. For more information, http://www.bhcosmetics.com.

Heart Defensor a.k.a. ThatsHeart, shares her bubbly personality with a total social reach of more than one million. Her relatability and honesty have made Heart a YouTube favorite and one of the industry’s fastest growing personalities. From beauty and fashion hauls, to the latest product reviews, hair and makeup tutorials and nail art, Heart has build up a global fan base. Teen Vogue, Nail It, and Los Angeles Magazine have recently featured Heart. http://www.youtube.com/thatsheart and http://www.youtube.com/user/ThatsHeartTV.

PandoDaily is a web publication that offers technology news, analysis, and commentary, with a focus on Silicon Valley and startup companies. It bills itself as "the site of record for Silicon Valley." Read more at http://www.pandodaily.com.

YouTube guru, ThatsHeart has over one million followers on her social media channels.