A tale of mystery and suspense, based on the author's own experience of Russians and their culture. The story owes elements to Le Carre and to Patricia Highsmith and is about the adult lives of two Russian boys who first meet at school in England. 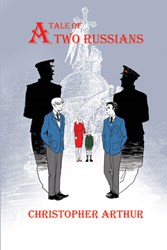 A Tale of Two Russians

"Where do the Russians go now?"

In A Tale of Two Russians Chris Arthur asks the question: Where do you go now? The Russians' identity has always been a central theme in their history - Peter the Great exemplifies the problem. Chris also draws out a strong element of suspense from a more sinister tradition which is still very much a part of Russian life.

A Tale of Two Russians follows the fortunes of two boys and their friendship through early adulthood. The first boy Nicko is the direct descendant of a White Russian émigré from the Revolution. The second boy Viktor is the grandson of Stalin's satrap who was the director of the Dalstroi Trust, a part of the Gulag system that mined gold in Kolyma. The satrap, Nikishov, is an actual historical character, while this grandson Viktor is the author's invention.

The story moves from London to Novgorod, to Montenegro and back to London again and describes the world of the New Russians following the end of the Soviet Union: the scams and criminal activities, the aspirations and attempts to forge fresh identities. But the past cannot be entirely escaped. An important character is a leading British politician, a neighbour of the Nikishovs in Chelsea whose relationship with a Russian oligarch is enigmatic to say the least!

The story has many of the elements of a thriller and the author has travelled extensively in Russia - especially in Siberia, and has also visited a number of the cities of the Golden Circle… needless to say he made a lot of Russian and Ukrainian friends. He taught English in the Ukraine in the immediate aftermath of the collapse of Communism and the break-up of the Soviet Union.

Chris Arthur read Archaeology and Anthropology at Cambridge University and did archaeological fieldwork in Cyrenaica when he traced the main water supply of ancient Ptolemais from its source to the city’s cisterns. He followed this up as a member of a field survey of sites in Fezzan and later he worked as a site supervisor for several seasons on a Byzantine excavation in Istanbul. Chris has also travelled in Central America, Peru, Turkey, North and East Africa, Iran, Eastern and Central Europe, Malaysia, Italy, France... Indeed travel has been one the chief stimulants to his writing and his abiding fascination is with Russia and the Russian people.

Dynasty Press is a boutique Publishing House that specialises in works connected to royalty, dynasties and people of influence. Committed to the freedom of the press to allow authentic voices and important stories to be made available to the public, Dynasty Press boldly publishes titles which reveal and analyse the lives of figures placed in the upper echelons of international society. Recent titles include the New York Times Best Seller, The Untold Life of Queen Elizabeth the Queen Mother (jointly with St. Martin's Press) by Lady Colin Campbell.

Christopher ArthurAuthor of A Tale of Two Russians