Seokjin Jeong of The University of Texas at Arlington, recently published an article in, "The Journal of Criminology," which concluded that, "Students with anti-bullying initiatives are actually more likely to be victims of bullying than students who attend schools without such programs." In fact, several such studies reach the same, or similar conclusions. 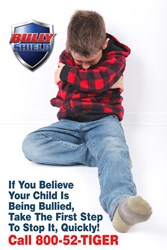 Give kids the confidence to stand up against bullies. It's the best answer to the bullying problem.

The most effective and direct solution to reduce bullying in public schools is to empower the victims. Bullies seek easy targets who are weaker than they are. If the other child won't be intimidated, the bully will move on.

Based on the long history Tiger Schulmann's has spent in tackling the bullying issues inherent among school children, coupled with the spate of recent studies which have demonstrated that most in-school anti-bullying programs are not only ineffective, but actually harmful, the organization has chosen to share its knowledge about bullying with the public.

Most anti-bullying programs in public schools throughout the country seek to either:

1) Reason with the bully.

Tiger Schulmann's has found that bullies cannot be reasoned with because they do not operate from a reasonable standpoint to begin with. They use raw emotion to intimidate, often because they feel insecure themselves. Reasoning does not change the bully’s desire to impose fear or alleviate the bullies own insecurities.

2) Investigate individual bullying incidents then attempt to discipline the bully.

According to the lead researcher, Seokjin Jeong (link: http://www.hindawi.com/journals/jcrim/2013/735397/), bullies have learned what to say when confronted by school officials.

According to Alon Feder, Director of Marketing for Tiger Schulmann's, "Bullies have always known how to adapt to adult investigations and continue satisfying their emotional need to intimidate. When victims tell on bullies, it makes matters worse. The bully's need to intimidate doesn't decrease, but their desire for revenge will increase and their tactics become sneakier. Tattling has been taboo throughout history for a reason. It doesn't work."

Additionally, a current California State Auditor’s report (http://www.bsa.ca.gov/reports/summary/2012-108) demonstrated that many schools don’t comply with the mandatory 60-day period within which reported bullying incidents must be investigated. Feder points out, "It's difficult to imagine that 60 days for investigating a bullying incident can be remotely effective, then not even meeting this goal?"

3) Encourage the passive observers of the incident to intervene.

“Most of the common anti-bullying policies involve asking students to stand up for each other against a bully. These kids are scared to stand up for themselves in the first place. How can they stand up for someone else? We are asking them to go against their nature and instincts,” says Head Instructor, Michael Marchand of Chalfont. “It gives the victims of bullying a false sense that someone else will solve the problem for them.”

There are two types of zero tolerance. First is zero tolerance of bullying. According to the National Education Association (nea.org/assets/docs/alternatives-to-zero-tolerance.pdf), not only is this zero tolerance policy not adequately implemented within the schools, “Being suspended from school significantly increases the likelihood of subsequent suspension or expulsion.” In other words, the bully will get worse, not better.

Unfortunately for the victims of bullying, these in-school programs actually increase bullying according to a new study, published in "The Journal of Criminology" (May 28, 2013). Lead researcher, Seokjin Jeong of The University of Texas at Arlington, concluded. "Students with anti-bullying initiatives are actually more likely to be victims of bullying than students who attend schools without such programs… One possible reason for this is, that the students who are victimizing their peers have learned the language from these anti-bullying campaigns and programs. The students become highly exposed to what a bully is and they know what to say or do when questioned by parents or teachers." (link: http://www.hindawi.com/journals/jcrim/2013/735397/)

According to Israel Kalman, a psychologist and top bullying expert refers to other studies when he claims, “They discovered that 86% of the published studies showed that the anti-bully programs had no benefit or made the problem even worse.” (link: http://www.psychologytoday.com/files/attachments/2610/why-psychology-is-failing-solve-the-problem-bullying.pdf)

What is the best solution? Tiger Schulmann's believes it is... empowering the victim… hands down.

According to Sensei Michael Marchand, "Kids who learn how to fight get into fewer fights. That may sound strange at first, but it's a fact, and it makes a lot of sense. Kids who know martial arts walk and talk with more confidence. When a bully approaches them, saying, 'I'm going to give you a beating,' The response will be, 'Oh, really? I don't think so.' This confident attitude is not the easy target the bully is looking for. Confidence is Kryptonite to bullies."

Feder adds, "School systems nationwide are spending millions of dollars on anti-bullying programs and for what? Reasoning with the bully, investigating bullying incidents, encouraging passive observers to intervene and zero tolerance have not been demonstrated to be effective methods to reduce bullying, and the studies cited show that these policies even increase bullying. Tiger Schulmann's has determined that being confident and knowing how to stand up for one's self is what works! One of the most effective ways to teach confidence to an non-confident child is to teach the child martial arts."

All Tiger Schulmann's locations regularly host anti-bullying events and are experts in how to deal with bullying situations. When a child exhibits confidence, the child can stop the process of bullying as soon as it begins by verbally exhibiting confidence.

Nearby Tiger Schulmann's locations can be found on http://www.tsk.com.