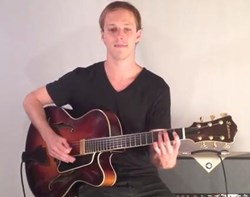 In this guitar lesson, now available on YouTube.com, Jon MacLennan teaches a classic blues bass line riff in the style of Ray Charles. TAB’s for this lesson are available at GuitarControl.com.

Charles, a native of Georgia, is credited as the “father of soul” and influenced generations of musicians by combining gospel, blues, and jazz thus creating the sound of “Soul”.

A “riff” is the catchy part of a song that sticks in your head. One of the most recognizable guitar riffs of all time is “Smoke on the water” by Deep Purple.

In this guitar lesson, MacLennan demonstrates a 12 bar 1 - 4 - 5 chord progression that is a staple of blues music. Rather than using chords, this lesson is about playing single notes that follow the chord progression that can have the novice guitarist jamming the blues in minutes. This riff is based around “F7” and consists of a shape of four notes based around the chord progression of, “F - B flat - C”. Over the “F” chord the notes of the riff are F (first fret of 6th string), C (third fret of 5th string, B flat (first fret of 5th string), and then F again, except one octave higher (third fret 4th string). Then shift to the four chord (B flat) by simple playing the same pattern but starting on B flat (first fret of 5th string). Then move back to the one chord again and then to the five chord by playing the same pattern again starting on C (third fret of 5th string), then its back to the four chord and then to the one chord. You can finish it off with a “C7#9” chord, “the good old Jimi Hendrix chord”, says MacLennan.

Los Angeles based guitarist Jon MacLennan began his career at the age of 16 and is one of the busiest upcoming session guitarist, artist, composer, producer, and professional educator in LA. Jon has done session work for Julian Lennon, Steven Tyler, and British pop star Jamie Cullum. He has appeared on Disney channels “The Suite Life of Zack and Cody” and on the sound track to the movie “Marley and Me 2 – The Puppy Years”. MacLennan earned a bachelor’s in ethnomusicology and jazz guitar studies from University of California, Los Angeles, and has been mentored by Carl Verheyen, Wolf Marshall, Kenny Burrell, Anthony Wilson, Tamir Hendelmen, Jimmy Wyble and Ron Anthony which has made him a highly sought after guitar instructor today.

GuitarControl.com is the leader in modern guitar instruction. It’s packed with recourses including articles, video lessons, and the best videos in the business for the beginner to the advanced guitar student taught by the best instructors out there. Whether you are into the blues, rock, jazz, metal, folk, or anything in between, they have you covered.