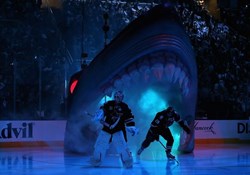 Ticket sales are off to a fast start for several NHL Hockey teams, such as the Pacific Division-leading San Jose Sharks who plan to bite into the Calgary Flames this weekend.

The competition is already fierce for NHL Hockey. On the diamond, baseball is in the do-or-die postseason, with Game 1 of the 109th World Series set to take the field next Wednesday, October 23, 2013.

On the gridiron, NFL Football is hitting Game 7 in its 16-game run, with enough drama to drive fans into the stands. Next, NBA Basketball hits the hardwood on October 29, just a week and a half away.

“On top of all of this sports activity, NHL Hockey took the ice just over two weeks ago on October 1,” said Marta Ault at online ticket marketplace BuyAnySeat.com. “NHL ticket sales are surprisingly strong, however, with seven teams ranked in the Top 25 sports ticket sellers this week.”

Last night, 12 games were played around the league. Prior to these contests, standings in the Eastern Conference ranked the 6-1 Maple Leafs atop the Atlantic, with the Penguins leading the Metropolitan Division at 5-1.

The Western Conference Avalanche, at 6-0, lead the Central Division and the Sharks, also undefeated at 6-0 are the leaders in the Pacific Division. Of course, 75 games remain in the regular season.

“That’s why we’re proud to offer sports fans the most comprehensive and continuously updated selection of sports tickets online, with a worry-free guarantee to protect their purchase,” said Ault.

“To access the full line-up of NHL Hockey tickets now available, customers can go to BuyAnySeat.com and click on NHL Hockey – then select their team and their tickets,” said Ault.

For this year’s season, the NHL has undergone a realignment. The old six-division format has been replaced by four new divisions: the Atlantic, Pacific, Central, and Metropolitan. But, according to Sean McIndoe at grantland.com in his October 1, 2013 season preview, this year’s legitimate Cup favorites include the same seven teams seen pretty much every year.

These squads encompass the Chicago Blackhawks, the league's best team from start to finish last season with a record of 36-7-5, 77 points, and the Presidents' Trophy – aka the Stanley Cup. They're bringing back essentially the same roster, making the team the top pick right now, says McIndoe.

In terms of the outlook for the Colorado Avalanche and their hot new coach, the fiery former goalie Patrick Roy, McIndoe writes, “Well, at least they'll be interesting. The team is stacked with young talent, especially up front, that could evolve into a powerhouse someday.”

Overall, hockey has the smallest total fan base of the four leagues, the smallest revenue from television, and the least sponsorship – although it is the most popular of these four major sports in Canada. In addition, a study by the Stanford Graduate School of Business in 2004 found that NHL fans in America were the most educated, affluent and computer literate of the four major leagues. (Source: wikipedia.org)