Back2Basics long-term drug and alcohol rehabilitation center partners with Late for the Train, a Flagstaff, AZ coffee company, to provide internships for residents in recovery. 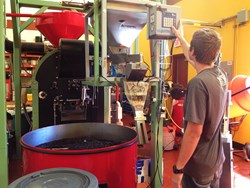 Weston, Beyond the Basics Intern, works in the Late for the Train Warehouse

Past jobs made it easy to use [drugs] because nobody cared if I showed up late and wasn’t functioning. Late for the Train actually holds me accountable.

Weston has been interning with Late for the Train for the past two months. He recently graduated from Back2Basics and is currently participating in Beyond the Basics.

“The experience has been great,” Weston said. “Past jobs made it easy to use [drugs] because nobody cared if I showed up late and wasn’t functioning. Late for the Train actually holds me accountable.”

Former resident and current Back2Basics Transition Supervisor Spenser Gharrity was the first to intern with Late for the Train. “It’s so rewarding seeing others get their act together, just like this internship helped me to do,” Spenser said. “A lot of guys go into the B2B program and have no idea how to be responsible. Late for the Train takes the time to train and teach you how to work. “

Roy DuPrez, CEO and founder of Back2Basics, has been long-time friends with Dave Dobrick, founder and owner of Late For The Train. Together they decided that forming a relationship between the two companies would be beneficial for both. “Through a series of long conversations and logistical planning I threw out some proposals and possible roles that some of our B2B interns could be fulfilling at the warehouse and cafés,” DuPrez said. “Dave has always been a fan of B2B and working with our demographic.”

Over a year later, the internship continues be a significant next step in the Back2Basics extension program. At Late for the Train, residents are putting the life-skills they have learned in recovery to the test in the real world.

“The fast paced environment gets you ready for any job,” Weston said. “When you walk into Late for the Train, there are always a million things to do, so have you have learn how to prioritize. Working here taught me how to be efficient and competent in any working environment.”

Weston plans to finish out his last month of Beyond the Basics, and apply for a full-time position with the coffee company.

“I believe these internships provide everybody involved with a sense of community and furthers the foundation for our B2B residents' recovery, one bean or cup at a time,” DuPrez said.