Camera trap study in the Himalayas proves endangered cats and local people can coexist. Neil Carter of the National Socio-Environmental Sythesis Center at the University of Maryland led the research, published in the peer-reviewed journal Ecosphere Oct. 18. 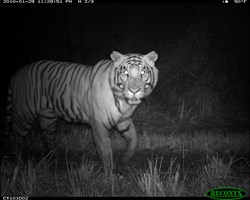 Camera trap catches the eye of a tiger

Hopeful signs that humans and tigers can coexist are emerging in rural Nepal, where the government has committed to doubling populations of the critically endangered big cat by 2022. A new study by conservation scientist Neil Carter provides evidence that when Nepalese villagers are empowered to make local land management decisions, the resulting landscape changes benefit both people and tigers.

Few wildlife species face more potential conflicts with humankind than tigers, which require large areas for hunting and raising cubs, and inhabit some of the world's most densely populated regions. Worldwide tiger populations have plummeted, from an estimated 100,000 worldwide at the beginning of the 20th century to perhaps 3,000 remaining in the wild.

Carter studies interactions between humans and tigers in Nepal’s Chitwan National Park and its environs. In the latest research, Carter and colleagues showed that in areas near the national park border where local people were permitted to harvest some of the natural resources they needed, such as timber and grass, the amount of tigers’ preferred type of habitat increased. Within the park, where resource harvests are prohibited, the amount of highly suitable habitat for tigers declined - perhaps due to illegal harvests.

A scientific paper on the research, which Carter led while working on his doctoral degree at Michigan State University, was published online October 18 in the journal Ecosphere. He is now a postdoctoral research fellow at the National Socio-Environmental Synthesis Center (SESYNC) at the University of Maryland.

Chitwan National Park was established in 1973 to protect tigers and other keystones of the area’s biodiversity, but it has significant costs for people living in the area. Residents depend on the forest's wood for fuel and building material, and use local grasses to thatch roofs and feed their livestock. Policies governing the park are top-down, with little input from residents, Carter said. Recognizing the potential for conflicts, in 1996 the Nepalese government added a buffer zone next to the park, where people have more access to the forest’s resources and more say in management.

“Many animals have their ranges extending outside of protected areas,” Carter said. “They don’t know and they don’t care where the border signs are. So areas outside protected areas are important.”

To find out how the buffer zones affected tigers, the researchers used camera traps – motion-sensitive cameras mounted along animal trails – that snapped photos of 17 different adult tigers inside the park and in the buffer zone.

They used satellite imagery to develop detailed maps of the land cover, including forests, grasslands, and bare ground. By superimposing evidence of tiger movements onto the maps, the researchers showed tigers prefer grasslands near water, which flow unbroken into nearby swaths of forest or grassy cover. The grasslands and water attract prey animals, the grasses conceal tigers while they hunt, and the connected habitat accommodates the big cats’ need for large territories.

The researchers used satellite photos taken between 1989 and 2009 to track changes in land cover inside and outside the park, and compare it to the habitat that tigers prefer. Throughout that 20-year span, they found, the park offered more habitat suitable for tigers than the buffer lands did. But the amount of good tiger habitat in the park declined between 1999 and 2009.

“In Nepal, we’re finding that there is this middle ground where you can have people using the land and still not only keep land from degrading, but can improve habitat quality,” said Carter. “Policies in Chitwan’s buffer zone, such as prohibiting livestock from freely grazing in the forests and community-based forest management, improved habitat quality.”

In July 2013, the Nepalese government announced the nation’s tiger population had jumped 63% in four years, with an estimated 198 tigers now living in the wild – many of them in and around. The government cited habitat improvements and a decline in poaching as possible reasons.

“Park managers are doing a tremendous job of conserving tigers and their habitat in the face of relentless pressure from the human population," said Carter, who has worked in the area since 2008. By helping to meet villagers’ need for resources, the buffer zones make managers’ daunting task more achievable, he said.

As Nepal and other countries work to pull tigers back from the brink of extinction, the study “provides a relatively straightforward way to measure how humans affect endangered animals’ habitat across space and through time,” said Carter. “The next step is to model how tiger habitat and human livelihood strategies will interact and change in the future under different conservation policy scenarios. I’m working closely with computation staff to develop this complex model.”

The National Socio-Environmental Synthesis Center—funded through a National Science Foundation grant to the University of Maryland—is dedicated to solving complex problems at the intersection of human and natural systems. For more information, visit http://www.sesync.org.