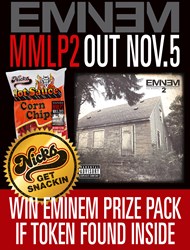 "We are really glad to have the opportunity to share our marketing efforts with a Detroit-based company." says Paul Rosenberg, cofounder of Shady Records and Em's manager.

From spicy Hot Sauce Corn Chips to mouth-watering Flamin' Hot Sauce Cheese Curls and Hot Habanero Tortilla Chips, Nicks has served snackers looking for a serious flavor kick for over 30 years. "Eminem is a hometown hero," says Nick Sulaka, owner of Nicks Chips. "To be able to work with Eminem and Shady Records/Interscope Records on this contest is huge for us."

Partnering with the local company was a no-brainer for Eminem. "We are really glad to have the opportunity to share our marketing efforts with a Detroit-based company. The contest with Nick's brand will be fun way to engage fans with this popular snack with rich history," says Paul Rosenberg, cofounder of Shady Records and Em's manager. The premier entertainment company in the area, Shady Records and Shady Films always pride themselves in supporting hometown businesses. As for Eminem's favorite Nicks flavor? It's hard to pick just one.

Buy a bag of specially marked Nicks Hot Corn Chips and other flavors now until mid December for a chance to win a prize pack including Eminem's new album The Marshall Mathers LP 2. Nicks is available for purchase at fine snack stores in Michigan, California, New York, Nevada and Georgia as well as online at http://www.nickschips.com.

ABOUT NICKS:
Nicks Chips is a Detroit based brand offering customers great service and flavorsome snacks that keep them coming back for more. With Nicks Hot Corn Chips leading the way, Nicks has expanded to more than twenty great tasting snacks.

ABOUT THE MARSHALL MATHERS LP 2:
The Marshall Mathers LP 2 is the highly anticipated eighth studio album by rapper Eminem. Led by the single "Berzerk", the album features production by the legendary Rick Rubin and features including Kendrick Lamar and Rihanna. The MMLP2 will be released November 5, 2013 on Shady Records/Interscope Records.