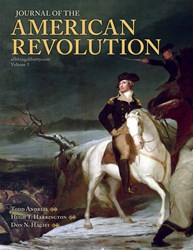 Featuring 60 essays by 20 historians, Journal of the American Revolution is an exciting new hardcover history book that debunks myths and addresses unanswered questions about the Revolution.

Academic journals on the subject of early America often over-intellectualize topics and can easily intimidate casual readers. Popular websites and periodicals, when they do tackle the Revolutionary War, typically don’t provide the substance, depth or breadth of historical study craved by serious readers. Aiming to fill the middle ground void is the new book Journal of the American Revolution (ISBN: 9780966075182; Ertel Publishing; November 2013; $26.95 U.S.; Hardcover; History).

The book is a remarkably presented collection of never-before-published essays and remastered articles from the webzine Journal of the American Revolution (allthingsliberty.com), which was founded in January 2013 by Todd Andrlik, author of Reporting the Revolutionary War (Sourcebooks, 2012). The book and website are edited by historians Todd Andrlik, Hugh T. Harrington and Don N. Hagist, and feature numerous expert contributors.

"After publishing 200 articles online for 250,000 readers, we are reversing the publishing trend, going digital to print, and offering our readers this stunning collector's print edition of important historical research and writing," said Andrlik.

In a world of increasing historical illiteracy and apathy, Journal of the American Revolution publishes passionate, creative and smart content intended to make history more palatable. It aims to delight casual readers, novice historians and expert scholars equally. Its content has been featured by MSNBC, Smithsonian, Slate and many more. The book presents groundbreaking story lines via a healthy variety of in-depth features and engaging columns, in both short- and long-form, with an eye for accuracy over legend. Each article is accompanied by high definition images – portraits, maps, photos and more – including some that are appearing in print for the first time.

“It’s edutainment, or a much-needed business casual approach to scholarship,” Andrlik said. “This book is intended to be a collector’s hardcover edition of a website that is quickly becoming the leading source of information about the American Revolution and Founding.”

Some of the questions and curiosities addressed in Journal of the American Revolution include:

Via nearly 60 articles by 20 different expert authors, these questions and many more are addressed with meticulous detail, fascinating anecdotes and stunning images. With the book planned as an annual offshoot of allthingsliberty.com, this is considered volume one of Journal of the American Revolution. For more information, please visit allthingsliberty.com/book.