Duke’s Chowder House will be giving away small bowls of their renowned all-natural Clam Chowder on November 12th in order to celebrate International Chowder Day. Owner Duke Moscrip and his son and business partner, John Moscrip, are pleased to share their signature specialty with Chowder enthusiasts. 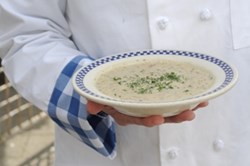 My grandfather made me eat his clam chowder or I didn't get a chocolate éclair. I loved those éclairs. I learned to love clams. - Duke Moscrip

On November 12th from 11 am to 10 pm, all six locations of Duke’s Chowder House will be giving away small bowls of their renowned All Natural New England Clam Chowder in order to celebrate International Chowder Day. Made with Surf Clams, Duke’s Chowder is one of the very few that is free of additives and preservatives. It took Duke more than three years to source ingredients that were natural and free of chemicals.

Duke Moscrip and son and business partner, John Moscrip, are pleased to share their signature specialty with Chowder enthusiasts. A restaurateur for more than 40 years, Duke first developed a taste for Clams at his New England grandfather’s dinner table. Duke didn’t particularly love grandpa’s Chowder, which was brothy and full of robust Clam flavors, but Grandpa made it clear that if Duke wanted the chocolate éclairs sitting in the middle of the dinner table, then he’d eat that Chowder and learn to like it. Indeed, Duke developed an astute taste for Clams back then. Many years later, when Seattle was hosting a massive Chowder competition in the 1980s, his then chef rose to the challenge and submitted their carefully crafted Chowder.

Duke’s Clam Chowder won that competition by a landslide (three years in a row). The creamy, herby Clam Chowder has been a fixture on his menus ever since. Naturally, Duke has some rock solid opinions on how to make a good Clam Chowder. Here are a few that form the foundation:

1. Use All Natural Ingredients—Chemicals dominate the labels of almost all Chowders found in grocery stores. Duke is a stickler for ingredients and goes to great lengths to keep additives and preservatives out of his Chowder. Canned Clams, which are full of tri polyphosphates, are out of the question. Hence, he purchases domestic Clams that are processed, flash frozen and shipped directly to him. These All Natural Clams have superior flavor and aroma and form the backbone of his Chowder. Bacon without sodium nitrite is a must.

2. Learn to Make a Roux—Duke says it’s important to learn to make a roux, which is a mixture of flour and butter and acts as a thickener. If the roux isn’t cooked properly at the beginning, then the Chowder will be a mucky pasty mess. He also explained that if the roux breaks, then the whole thing is a flop.

3. Balance the Flavors and Ditch the Carrots—Duke knows that Clam has to be the dominant flavor and nothing should overpower that. He also says to ditch the carrots—they have no place in Chowder and their sweetness adds the wrong accent. Celery is okay because it adds a little crunch, which you want.

4. Choose the Correct Potato—The choice of potato can make or break the results. Duke likes red potatoes because they don’t give off too much starch and bleed into the Chowder.

5. Know your Herbs-After much experimentation, Duke knows that basil, dill, marjoram, parsley, and thyme are the essential herbs in his Chowder, adding a subtle accent to the dish.

6. Give it Time—Duke believes in the power of curing the Chowder, which basically means that the Chowder cools and is kept overnight in the fridge. He says, “The second day is dramatically better than the first. The flavors bloom during a cure. They get more pronounced.”

So, if you need a Chowder fix and happen to be in the Seattle area on November 12th, head to Duke’s for a free sample and some lively Chowder chat!

About Duke’s Chowder House: Dedicated to bringing its customers the best every day, Duke’s Chowder House has six locations throughout the Puget Sound region. Owner Duke Moscrip has been at the helm for thirty seven years and continues on his passionate journey to source all natural, healthy and fresh ingredients. Duke's food is free of hormones, antibiotics and free of harmful chemicals. He wants the best possible ingredients for his guests. Duke pioneered the concept of "ice chilled, better than fresh." Duke's is an upscale-casual Pacific NW seafood concept offering signature, flavorful, 100% Sustainable Wild Seafood, Award Winning Chowder and Grass Fed Burgers in a gathering place that is friendly, comfortable, clean, unpretentious and filled with personality.