After transitioning from open wheel racing to sports car racing, the young American took full advantage of his newfound position within the Porsche Motorsport family and proved his abilities in Germany's toughest one make championship series. 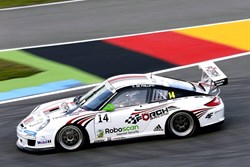 Ultimately, it was my consistency that enabled me to win the 2013 Porsche Carrera Cup Deutschland Rookie of the Year Championship.

This time last year, if you were to tell Connor De Phillippi that he would be the 2013 Porsche Carrera Cup Deutschland Rookie of the Year, he most likely would have laughed. As one of America's top open wheel racing talents, De Phillippi had his eyes set on moving up the Mazda Road to Indy program and eventually filling an IndyCar seat. As fate would have it, his motorsport career was about to take an unexpected change. Luckily, it happened to involve the world's most successful brand in sports car racing -- Porsche.

In late 2012, De Phillippi was selected to compete for one of two positions as a Porsche Junior driver. After a rigorous selection process, De Phillippi received the call he had been hoping for. He was now a Porsche Junior driver and part of a prestigious motorsport family. Instead of aiming for a ride in the IndyCar Series, his new target was an eventual spot on the Porsche Works driver team. However, he still had to prove himself in the Porsche Junior Program and that officially started in early May 2013 at Hockenheim.

From the get go, De Phillippi realized the Porsche Carrera Cup Deutschland was a premier championship, with some of the best sports car racers on the planet. As much as this challenged the young Californian, De Phillippi proved from the first green flag that he had the ability to compete with drivers who had upwards of 5 years experience in the Porsche GT3 Cup car. It was this immediate comfort, competitiveness and consistency that ultimately led De Phillippi to one of his 2013 goals -- winning the Rookie of the Year Championship.

For round 16, the FORCH Racing/Lukas Motorsport team handed over the reigns to a fast car and a highly motivated driver. De Phillippi was able to qualify the Roboscan Internet Security Porsche GT3 in P4, but race officials declared that a few drivers were guilty of track limit infringement and moved further back in the field. Unfortunately, this included De Phillippi. His P4 starting spot was negated and he was forced to start back in P16.

During the weekend's first race, De Phillippi manages to claw his way up to P11. However, the 25 minute sprint race ended under a yellow flag and the opportunity to gain more positions vanished. Despite the less than ideal results of round 16, De Phillippi managed to post a lap time quick enough to put him in P3 for the season finale the following day.

For the season finale, the drivers had not only each other to battle, but also mother nature. The forecast called for rain, something the Southern Californian had only raced in three previous times in his motorsport career. Regardless, with a P3 starting position, De Phillippi was in an ideal position to not only seal the Rookie of the Year Championship, but also check off his goal of standing on the podium before seasons end.

As the race unfolded, De Phillippi managed to get himself into P2 and on his way to accomplishing both of his 2013 racing goals. On lap 10 of the 17 lap race, De Phillippi made a mistake on the exit of turn 1 and got onto the synthetic grass. In dry conditions, this would not have been an issue, but in the wet, this resulted in spin and put an end to a fantastic race and De Phillippi's chance at the podium.

De Phillippi reflected back on the finale and his first sports car race season in a post-race interview. "There are certainly mixed feelings about today. As far as the championship goes, the team did an amazing job and we finished every race, until the final one today. We started P3 and I ran in P2 most of my race. However, with the tricky track conditions out there, all it took was one small mistake on the exit of turn 1 and my race and chance at a podium finish was over. It's frustrating to end the season with a my first DNF, but overall, my consistency over the course of the full season paid off and I was able to capture the Rookie of the Year championship.

I have to thank my primary sponsor, Roboscan Internet Security for their support. Without them, the season may not have turned out as well as it did. Certainly, I have to thank Porsche Motorsport for their belief in me and taking me into their family. Wieslaw Lukas, Frank Funke and the whole Lukas Motorsport family proved they are a world-class team and they gave me a great car to work with each and every time out on track. A big thank you to Oakley, Bell Racing Company, Brett King Design, Justice Brothers, McKenna Porsche, Patrick Long and of course my amazing family for all of their support."

With his first full season of sports car racing under his belt, De Phillippi is surely ready to improve upon his successful 2013 campaign and contend for an overall championship in 2014.

For more information on Connor De Phillippi, you can visit his website at -- http://www.connordephillippi.com.