Young Organic Farmers Visit More Than 1,825 Students in 84 Classrooms to Inspire and Educate About Where Our Food Comes From 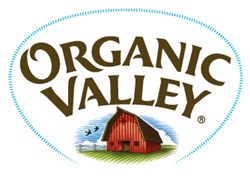 'It’s exciting to see our Generation Organic farmers engaging with schools through the Teach-In and with their communities in their daily lives,' said George Siemon, CEIEIO of Organic Valley and one of its founding farmers.

Organic Valley, the nation’s largest cooperative of organic farmers and a leading organic brand, today announced that its first Generation Organic™ Teach-In is underway. “Gen-O™” farmers are visiting more than 84 classrooms across the nation through Oct. 25, educating over 1,825 students in grades K-5 on the benefits of organic food and farming. The Teach-In is being conducted in conjunction with National Farm to School Month http://www.farmtoschoolmonth.org/, a time to celebrate the connections that are happening all over the country between schools and local food.

Generation Organic is a group of young Organic Valley farmers aged 16 to 35 who represent the next generation of sustainable agriculture leaders and who believe in the power of organic to change the world. During each Teach-In experience, Gen-O farmers will share their family farm stories and photos and lead an interactive discussion on producing high-quality organic food, including how health begins from the ground up. The young farmers will also provide a fun, engaging butter-making race activity and then eating the delicious food they learned to make themselves.

The Gen-O farmers participating in the first Teach-In hail from the Heartland to as far as Maine and California. They represent a small but growing number of young people returning to family farms or starting their own farming operation. Since 1935, America has lost approximately 4.7 million farms, and of the 2.1 million farms that remain, farmers are an average age of 57. In contrast, Organic Valley has an increasing number of farmer-owners under 35 years old, many of whom are actively encouraging more young people to pursue organic farming as a rewarding and economically viable profession via the Gen-O program.

“It’s exciting to see our Generation Organic farmers engaging with schools through the Teach-In and with their communities in their daily lives,” said George Siemon, CEIEIO of Organic Valley and one of its founding farmers. “Generation Organic gives these young organic farmers an opportunity to share with other youth their vision for a better world. These young people are the future of sustainable agriculture—their hard work and enthusiasm inspire us all.”

Key visits for the Generation Organic 2013 Teach-In include elementary schools across the country from Maine to Wisconsin to California, such as Longfellow School in Portland, Maine; Sparta Lakeview Montessori, in Sparta, Wis., and Liberty Elementary in Petaluma, Calif., to name a few.

Organic Valley Family of Farms: Independent and Farmer Owned
Organic Valley is America’s largest cooperative of organic farmers and one of the nation’s leading organic brands. Organized in 1988, it represents 1,834 farmers in 35 states and achieved $860 million in 2012 sales. Focused on its founding mission of saving family farms through organic farming, Organic Valley produces a variety of organic foods, including organic milk, soy, cheese, butter, spreads, creams, eggs, and produce, which are sold in supermarkets, natural foods stores and food cooperatives nationwide. With its regional model, milk is produced, bottled and distributed right in the region where it is farmed to ensure fewer miles from farm to table and to support our local economies. For further information and to learn about Organic Valley’s 25 years of sustainable agriculture as it celebrates its anniversary in 2013, visit http://www.organicvalley.coop. Organic Valley is also on Twitter @OrganicValley and Facebook http://www.facebook.com/OrganicValley.