Nine months after its commercial launch, the PowerPot V gets top honors in Backpacker’s annual award. Power Practical says its flagship device is the first of many innovations to come. 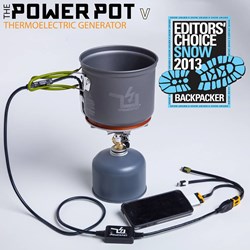 When you've got a flat-top wood-burning stove and you're heating up a hut or yurt... you've got a never-ending supply of juice at your fingertips

In its perennial round-up of the year’s hottest gear, Backpacker Magazine has chosen the PowerPot V by Power Practical for the Snow Award. The award recognizes products that lead the way in the outdoor industry.

"When you've got a flat-top wood-burning stove and you're heating up a hut or yurt... you've got a never-ending supply of juice at your fingertips," Backpacker Magazine's official tester said of the PowerPot.

The PowerPot V is a portable thermoelectric generator. It serves as both a power source for USB devices and a cooking pot for preparing soup, tea or MREs. It uses thermoelectric technology to convert excess heat into electricity while cooking.

“We wanted to make something that harnessed the immense energy of fire so it could be used to power electronic gear,” said co-inventor David Toledo.

After three years of development, Toledo and co-inventor Paul Slusser turned to the popular crowdfunding site Kickstarter to help fund production of the PowerPot V.

“We knew the idea would be a hit, but we needed the support of the crowdfunding world to make it happen,” said Slusser.

Launching on Kickstarter in April of 2012, the duo raised over twice their original goal of $50,000 and pre-sold nearly a thousand PowerPots. They went to work on the production of the PowerPot and built a team to help run the company, now called Power Practical. This would lead to a commercial sales debut at the 2013 Winter Outdoor Retailer.

Just nine months later, the product was given the nod by Backpacker Magazine, receiving the prestigious Editor’s Choice Snow Award for 2013. The PowerPot’s rapid climb from idea to crowdfunding, commercial launch and now receiving this accolade demonstrate its popularity.

“It only took twelve months from shipping our first PowerPots out to receive this award,” said Toledo, who now sits as President of Power Practical, “and better yet we received it just nine months after we launched into commercial retail. We’re overwhelmed by the support and can’t wait to show everyone what we are coming out with next.”

To learn more about the PowerPot, check out the product’s official website at http://www.thepowerpot.com. Power Practical is a Salt Lake City based group of engineers, entrepreneurs and outdoor enthusiasts who emphasize diversity in energy resources by developing innovative, effective and affordable energy products to keep you connected anywhere, anytime. There are areas of the world that simply fall off the grid, suffering from power outages and unavailable energy resources. With Power Practical, you are never off the power grid and always powered up, no matter where in the world you are.