The Calm After the Storm: Stories From the Front Lines 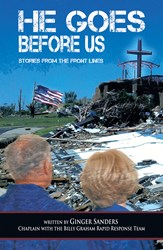 In every community we minister to, we see God’s presence. The stories in the book are about things we have seen that only God could have orchestrated.

"God is not surprised by any storms in our lives. In fact, we often see him most during these difficult times."

So says Billy Graham Rapid Response Chaplain Coordinator Ginger Sanders, author of He Goes Before Us, a collection of 31 faith-building stories from the front lines of natural and manmade disasters across the United States and the world.

Readers will be challenged and uplifted as they travel along with Sanders and the rest of the Billy Graham Rapid Response Team chaplains as they deliver a moving message of hope and encouragement. From the Sandy Hook school and Aurora theater shootings to the massive floods in Iowa, Sanders has ministered to countless people affected by some of the unexplainable tragedies we often watch as news stories but rarely see on a human scale.

"I wrote this book to help people realize that God is alive and well and still working in people’s lives today," says Sanders. "In every community we minister to, we see God’s presence. The stories in the book are about things we have seen that only God could have orchestrated."

Ginger Sanders is a chaplain coordinator with the Billy Graham Rapid Response Team, a ministry of the Billy Graham Evangelistic Association. An author and speaker, she has taught several Christian classes and Bible studies. Sanders and her husband, Denny, live in north Alabama where they enjoy family time with their four children and nine grandchildren. This is her second book, after Round Eyes, the true story of her adopted son.