Direct Sellers Meet with Congress: Independent Sellers from Across U.S. Meet with Members of Congress at 2013 Direct Selling Summit on Capitol Hill 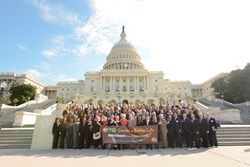 The participants came from every corner of the country, from Florida to California, to tell their representatives how direct selling has given them access to flexible, entrepreneurial opportunities that enable them to set and achieve a variety of personal goals. Direct sellers play important roles in their local economies, offering products from home goods to health and beauty items.

“These direct sellers want their elected officials to know how their small businesses have helped them create a better life for themselves and their families,” said Joseph Mariano, president of the Direct Selling Association, which organized the event. “With sales increasing year over year since 2009, direct selling has remained strong even in the face of an uncertain economic climate.”

In 2012, nearly 16 million people participated in direct selling in the United States, and direct sales totaled $31.63 billion, according to DSA’s Growth & Outlook Survey. This represents a 5.9 percent year-over-year increase from $29.87 billion in 2011.

Summit participants also took the opportunity to reaffirm their commitment to the highest standards of ethical business practices, innovation and customer service by signing the Direct Selling Proclamation and Compact. The proclamation stands as a symbol of the important role direct selling plays in the economy and in the lives of millions of men and women across the country.

“Whether a person gets involved to earn supplemental income, or just wants to buy products they use and love at a discount, direct selling offers a flexible choice to achieve these goals,” said Mariano. “The men and women who came to Washington, D.C., represented the demographic and motivational diversity that is a hallmark of direct selling – everyone has a unique success story and elected officials need to understand that the ability to tailor one’s experience in direct selling is what gives it economic potential that should not be underestimated.”

ABOUT DSA
DSA is the national trade association of the leading firms that manufacture and distribute goods and services sold directly to consumers. Among its more than 220 active and pending members are companies selling both via a party-plan method and in the traditional person-to-person style. In 2012, U.S. direct sales were more than $31.6 billion with nearly 16 million direct sellers nationwide. The vast majority are independent business people—micro-entrepreneurs—whose purpose is to sell the product/service of the company they voluntarily choose to represent. Approximately 90 percent of direct sellers operate their business part-time.

For more information on direct selling, DSA and its Code of Ethics, please visit DSA’s website, http://www.dsa.org or http://www.directselling411.com.