Animal Cruelty Exposed in New Documentary by The Paw Project

Animal Support cofounders, Julian Omidi, Maria Abaca, and Dr. Michael Omidi, announce their support of “The Paw Project,” a new documentary film by the charity of the same name, which exposes the cruelty of the feline declawing process. The new movie premiered September 27th at in New York City. 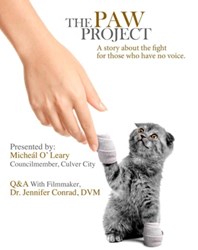 The Paw Project, a charity dedicated to ending the practice of feline declawing, premiered a new documentary film on September 27, 2013in New York City. The film exposes the true medical and behavioral repercussions of declawing and also provides an account of the work of charity founder and animal advocate, Dr. Jennifer Conrad. Maria Abaca and the Omidi brothers through their charity, Animal Support, endorse this film and the efforts of The Paw Project to put an end to this disturbingly common practice.

“Cat declawing is a procedure that is essentially tantamount to animal torture,” says Julian Omidi, cofounder of Animal Support. “We applaud the work of Dr. Conrad and her charity, The Paw Project, and we hope that the film is a success.”

The film, entitled “The Paw Project” same as the name of the charity, features testimony from animal welfare advocates, veterinarians and pet owners about the realities of declawing felines, as well as the profit incentives to continue the practice. More information about the film is available on IMDb at: http://www.imdb.com/title/tt2447750 A list of theaters featuring the film can be found on The Paw Project website: http://www.pawprojectmovie.com.

While there are approximately 36 million cat-owning American households, there is a surprising lack of appreciation for the real process of declawing. Far from being a minor process that merely prevents cats from scratching the furniture, declawing is a brutal procedure wherein the cats’ toes are cut off at the first joint, rather like having the finger tips cut off where the nails end. Cats may spend the rest of their lives in consistent pain, unable to walk or sit comfortably. The unremitting pain can lead to emotional and behavioral problems, such as extreme aggressiveness, litter box avoidance, inability to socialize, and depression. Declawed cats are vulnerable to attacks from other animals, since their primary method of defense has been removed.

The Paw Project (http://www.pawproject.org) has successfully advocated for the prohibition of declawing. For the last decade, since 2003, thanks to the efforts by The Paw Project, eight major California cities have outlawed the practice of declawing and the state has banned the declawing of exotic large cats.

Animal Support (http://www.animalsupport.org) is dedicated to addressing pet over-population and abuse by promoting charities working on behalf of animal well-being. The organization was founded by brothers Dr. Michael Omidi and Julian Omidi, along with long-time friend Maria Abaca, to advocate for animal protection, rescue, adoption, and spay and neuter laws. Animal Support does not accept donations but encourages direct contributions of money and talents to the charities and organizations featured on our website. For more information about Animal Support, send a message using the website’s Contact Us function. Check out Animal Support on Facebook, Twitter, Google+, and Pinterest.