The cofounders of Civic Duty, Julian Omidi and Dr. Michael Omidi, are confounded by national news stories relating the continuing violence in America’s schools. The most recent -- a school shooting in Sparks, Nevada, where a teacher’s heroic actions saved children’s lives. 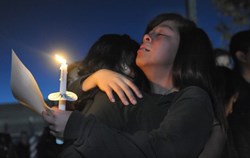 Teachers are truly our everyday heroes.

It’s happened yet again: senseless and horrific violence involving injured young people and a killed teacher at an American school. This time the site was a middle school in Sparks, Nevada, and the perpetrator was a 12-year-old student who opened fire on his classmates just before the bell rang, calling students to their classes. The teacher was slain as he tried to disarm the shooter and gave students the opportunity to get away. Julian Omidi and Dr. Michael Omidi, cofounders of Civic Duty, are saddened by the loss of another teaching talent, who made the ultimate sacrifice to save school children.

"Teachers are truly our everyday heroes," says Julian Omidi, cofounder of Civic Duty. "Today’s teachers work hard to impart knowledge and guidance to young minds, but they also seem to be called upon, more and more, to shield kids from terrible danger. We owe teachers a large debt of gratitude for their selfless dedication on behalf of our young people."

The teacher lost in Nevada was Mike Landsberry, a very popular math teacher at Sparks Middle School. A former Marine who served in Kuwait and Afghanistan, Landsberry rushed to help the children when he heard shots fired on the playground. The 12-year-old boy, believed to be seeking retaliation for episodes of bullying, wounded two of his fellow students in addition to killing Landsberry. In the end, he took his own life.

This shooting comes nearly a year after 26 children and adults were murdered at Sandy Hook Elementary School in Newtown, Connecticut. Reports of school violence continue with recent incidents in California, Texas, and North Carolina. In schools across the nation, security measures are being increased and teachers are taking self-defense and combat classes, something few of them could have foreseen when they chose to be educators.

Civic Duty (http://www.civicduty.org) is dedicated to mankind’s search for meaning and promotes the values of its founders, philanthropists Julian Omidi and his brother Dr. Michael Omidi. The charity’s mission is to inspire creative outreach, community service, and volunteerism through the stories of every-day people who are making an extraordinary difference in the world. Mahatma Gandhi once said, "Man becomes great exactly in the degree in which he works for the welfare of his fellow men." To get involved and help make a difference, send us a message using the website’s Contact Us function. More information about Civic Duty can be found on Facebook, Pinterest, Google+, and Twitter.