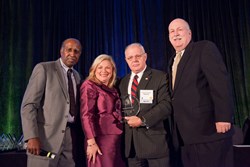 These nominees are improving their organizations security posture and collaborating during our ISE® Programs to significantly advance the security industry as a whole.

The ISE® North America awards recognize both information security executives and projects for outstanding achievements in risk management, data asset protection, compliance, privacy and network security. Award program participants are located across the U.S. and Canada, and nominations were considered within three categories based on industry classification.

“With close to 60 nominees, we were able to recognize many of North America’s most innovative companies and most prominent security executive thought leaders as well as their project teams,” said Marci McCarthy, CEO and president, T.E.N. “These nominees are improving their organizations' security posture and collaborating during our ISE® Programs to significantly advance the security industry as a whole.”

Academic/Public Sector Category
Kevin McKenzie, chief information security officer for Clemson University, was selected as the Information Security Executive® of the Year Award winner in the Academic/Public Sector Category. McKenzie is responsible for leading a team of InfoSec professionals dedicated to ensuring the security and privacy posture of a top 25 public research university. Finalists included Connie Barrera, executive director for security and compliance at the University of Miami, and Larry Wilson, chief information security officer for University of Massachusetts.

“University Cyber-Security Initiative,” implemented by the University of Massachusetts, was selected as the ISE® North America Project of the Year in the Academic/Public Sector Category. The project involved planning, designing, implementing and managing a University-wide technology-based program based on the SANS 20 Critical Security Controls (CSC). Kennesaw State University’s “Identity and Access Management Initiative” was selected as a finalist in this category.

Merck’s project, “EngageZone,” was selected as the ISE® North America Project of the Year in the Health Care Category. This project involved a partnership between Merck and Exostar to redefine business-to-business engagements by creating a Life-Sciences Identity Broker in the Cloud. PharMerica’s project, “EPCS for Electronic Prescription Pharmacy Compliance,” was selected as a finalist in this category.

Luminary Leadership Award
Also honored during Wednesday’s awards program was the 2013 Luminary Leadership Award winner Howard Schmidt, retired special assistant to the President and cybersecurity coordinator for the White House. Presented annually, the award celebrates the achievements of an outstanding leader and industry practitioner for his or her distinguished service, stewardship and contributions in advancing the information security industry.