The State of The American Diet: Americans Eating More Fruit as Obesity Levels Off 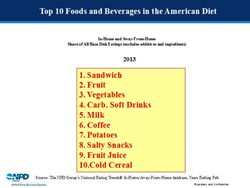 “Fruit is the number one snack and dessert in the United States and now makes up six percent of end dishes we consume,” says Harry Balzer, chief industry analyst and author of Eating Patterns in America.

Americans are shifting to healthier, simpler diets and that has helped to stabilize obesity levels. The NPD Group, a leading global information company. NPD’s 28th annual Eating Patterns in America Report finds Americans consume more fruit, more bottled water and more yogurt than they did a decade ago.

Americans’ Need for Natural
“Fruit is the number one snack and dessert in the United States and now makes up six percent of end dishes we consume,” says Harry Balzer, chief industry analyst and author of Eating Patterns in America. "The movement toward more fruit over the last decade is, in my opinion, a movement toward the need for natural. Fruit is generally not processed and requires less preparation than many other foods," says Mr. Balzer.

Obesity in America
Perhaps the shift toward a more natural diet is part of an effort by American families, who spend on average 70 minutes a day eating, to get back to the basics.

"People are getting a handle on weight gain in this country. We may not yet be losing weight, but we've stopped gaining weight. You get a sense that the obesity trend has stabilized," says Balzer.

The NPD Group's eating trends research show that more than 30 percent of adults are obese. That number has leveled off in the last few years. Balzer noted in The NPD’s 18th Annual Eating Patterns in America Report, 10 years ago that he saw the first signs of a leveling off in the trend in the number of overweight Americans, long before any other national study was onto the trend.

“While health concerns play a role in the American diet, the cost of food and the need for convenient preparation are also major drivers in our food and beverage selections,” says Balzer.

Want to know more about America’s eating habits? Harry is available to comment on what’s behind the numbers and what’s happening on the eating and dieting scene. Harry appears regularly on radio and Television and in print.