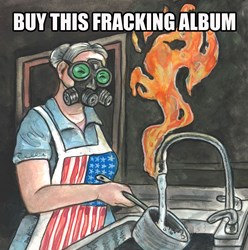 "I think its important for every community to have access to clean drinking water and it's that community's right to protect and know what is in it." - PATRICK NORMAN, RUSTED ROOT

From the creators of the Independent Music Award winning Occupy This Album comes Buy This Fracking Album, a musical response to Fracking and a quest to save America’s drinking water.

What is Fracking?
Fracking, short for hydraulic-fracturing, is a dangerous method of natural gas extraction. It entails drilling deep underground into shale deposits and blasting millions of gallons of water laced with sand and hundreds of toxics chemicals to break apart the rock to release methane (natural gas).

Over the past decade, there has been a rush by gas companies to find and extract natural gas using this controversial drilling method. But fracking has brought rampant environmental and economic problems to rural communities. Accidents and leaks have polluted rivers, streams and drinking water supplies – leaving many Americans, primarily in rural (and often impoverished) communities without safe drinking water. Fracking has been linked to well over a thousand cases of groundwater contamination across the United States. Also common from the practice is surface water contamination, significant air quality problems, public health catastrophes, economic losses to communities, and a host of other problems. (Click here for more information about fracking).

Buy This Fracking Album will feature original songs from both iconic and emerging artists who want to support the vitality of America’s drinking water, and our earth’s environment.

Buy This Fracking Album will be released in early 2014 on MOVEMENT MUSIC RECORDS. Music with a mission, the album will bring both awareness and financial support for the anti-fracking movement. A portion of proceeds received from the sale of this work will go directly to organizations within the Anti- Fracking Movement, including a great organization MARCELLUS PROTEST an Anti Fracking organization based out of Pennsylvania. Buy This Fracking Album is produced By Jason Samel of Movement Music Records, in association with Girlie Action Media, Live Peace Productions and Music For Occupy.

“A one-two punch designed to strike at the heart of capitalism.” – Rolling Stone

“Occupy This Album,” this homage to the Occupy Wall Street movement, is thick with troubadours and an eye toward social justice. The four-disc compilation is one part “Who’s who” and one-part “Who’s that?” But there are some gems within this encampment." - Associated Press

“Where are the songs for Occupy's time in history? Who will write the words and music and poetry? Will we find our voice? These questions have been answered in full and emphatically with the debut on May 15, 2012, of Occupy This Album…” – Huffington Post

“… the best that can be asked of any grassroots revolution.” – Entertainment Weekly (B+)

Whether it’s Mahalia Jackson’s “We Shall Overcome” or Green Day’s “American Idiot,” anthems fuel movements. The Occupy movement will have plenty of theme songs to choose from after the release tomorrow of “Occupy This Album.” – Boston Herald

“Those cynics who told the incessant drummers of Occupy Wall Street in New York not to quit their day jobs might be reconsidering -- they just got a record deal (of sorts).” – LA Times