Youth unemployment in the UK is a "public health time bomb waiting to explode", according to a review by the World Health Organisation. The Military Preparation College claims that this time bomb can be defused with the correct intervention and tools for the job. 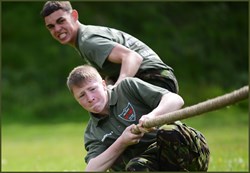 The programme develops an appetite for future vocational success

The Military Preparation College recognises that by giving young people short term, realistic goals leading to future success, they reclaim an element of control over their lives.

A recent BBC News report,"Jobless youth are 'public health time bomb', says WHO" has warned of the World Health Organisation's fear about the health consequences of high numbers of NEETs - people Not in Employment, Education or Training. More than one million 16 to 24-year-olds in the UK are classed as NEET.

Prof Sir Michael Marmot, who led the review, said: "Persistent high levels of the number of young people over 18 not in employment, education or training is storing up a public health time bomb waiting to explode." Evidence shows that being unemployed has immediate health consequences, including an increased risk of depression and suicide. In the longer term it increases the risk of chronic diseases such as cancer, heart disease and stroke.

A separate survey, published last summer by the UCU lecturers’ union claimed that many young unemployed people feel marginalised, pessimistic and lacking in control over their lives. The BBC News story "Third of young unemployed 'rarely leave house'" reports on a survey of 1,000 youngsters in the NEET category and found a third had experienced depression and more than a third "rarely left the house".

Prof Marmot said: "We are failing too many of our young people on a grand scale.”

The Military Preparation College has been taking steps to reduce the number of NEETs since its formation 14 years ago. Its courses are aimed at preparing young people for a career in the Armed Forces. It has proved particularly successful at engaging young people in the NEET category or at risk of entering the NEET category. Managing Director and founder of the College, Huw Lewis MBE commented: “There is much evidence which highlights the devastating consequences, both short and long term, of becoming trapped in the NEET category. Many people have found themselves there due to disillusionment with their futures, following lack of success in the traditional education system. Others have experienced particular social difficulties through no fault of their own, which have been a contributing factor. The Military Preparation College recognises that by giving young people short term, realistic goals leading to future success, they reclaim an element of control over their lives. This then raises self esteem, decreases marginalisation and develops in them a sense of optimism.”

The approach has proved to be a model of success, with 1,750 military enlistments and 3,000 positive progressions into other areas of employment or training.

Huw Moores, Employer Engagement Manager added: “The students leaving this course are highly motivated and prepared for their futures. Enlistment statistics show that they have a far higher rate of passing selection and a much increased chance of staying in the Armed Forces than the general intake. The NEET group should be recognised as a pool of untapped potential, not as a difficult-to-solve problem which is all too often the case. Hopefully there will be an increase in the number of initiatives aimed at tackling the issue by providing relevant training, which engages the young people and leads to genuine vocational achievement."