A joint venture company has been created in Hong Kong by RunRev, a Scottish company, and Dr. Andy Parng, a Chinese American entrepreneur, to set up a subsidiary company in Beijing to promote LiveCode in China. 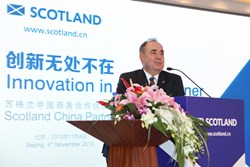 "Scotland is leading the way in digital technology and today's announcement of a joint venture between Edinburgh company RunRev and a Hong Kong entrepreneur shows significant opportunities for growth in a Chinese market for apps and mobile technology."

LiveCode is a high level language with a user friendly interface and a powerful cross platform deployment engine. LiveCode uses plain-English words and phrases for most of its operations, eliminating the obscure symbols and complicated structures required of other programming languages. LiveCode is easy to learn and use, requires 90% less code, and can deliver a 10-fold increase in productivity over traditional languages. LiveCode enables users to create applications using the platform of their choice and deploy to virtually every desktop computer and mobile device in use today, with customers creating applications that run on the Web, desktop or server, for the iOS, Android, PC, Mac, or Linux. In April 2013 an open source free version of LiveCode was launched making mobile app creation achievable to everyone with a computer.

In summary, LiveCode is a complete cross platform software development tool with the three unique things to make it stand out from others:
1.    It is English-like and easy to learn and use.
2.    It is open source and free for personal and open-source uses.
3.    It is cross platform and supports all major computing platforms and mobile devices.

LiveCode is a perfect choice for Chinese programmers, non-programmers, educators, students, and anyone who wants to code with ease and without paying any upfront fees. We believe LiveCode can make significant contribution to China software development. It is also very suitable for use in schools to train students' logical thinking and increase students' interest in computer programming.

We expect to have 50,000 LiveCode downloads in China in the first year. This number will go up to 250,000 in the second year and over half a million in the third year. Current LiveCode commercial successes include both SMEs and Fortune 500 companies. LiveCode apps have grossed over US $100 million and include #1 best sellers, enterprise business systems, games and productivity tools. By entering the Chinese market, LiveCode can significantly increase its commercial value.

"Scotland is leading the way in digital technology and today's announcement of a joint venture between Edinburgh company Run Rev and a Hong Kong entrepreneur shows that there are significant opportunities for growth in a Chinese market for apps and mobile technology that is expanding at a rapid rate.

"This new partnership and the company's new Chinese website are really exciting developments for those involved and the wider industry in Scotland, with projected profits of up to £30 million from Run Rev's China business, and great opportunities to expand Scotland's influence and reputation in this developing sector."

About RunRev
RunRev based in Edinburgh, Scotland makes the LiveCode cross-platform development environment for building sophisticated mobile, Web, desktop and server applications. The company aims to open doors with technology by empowering people to create apps through an intuitive and easy-to-learn programming language. This robust programming language has developed into software that could be deployed to mobile platforms as well as desktop and is used in over 40 countries around the world.

About Dr. Andy Parng
Dr. Parng is a serial entrepreneur now working in Beijing to focus on the China mobile markets. He worked at Apple for three years and was one of the key contributors of Apple Macintosh User Interface Design Guidelines. From 2005 to 2009, he managed the entire Trend Micro consumer product line with a 60-million user base and US$400 million annual revenue. Dr. Parng received his Ph.D. in Human Factors and MS in Computer Science from the University of South Dakota with the Outstanding Graduate Student Award.