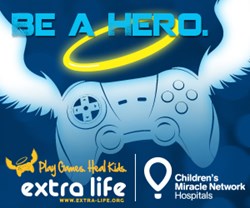 More than 31,000 players rallied together over the weekend raising $3.7 million to-date for Extra Life, a Children’s Miracle Network Hospitals gaming fundraiser, despite malicious attacks to the program’s donation website, extra-life.org.

Extra Life participants from every U.S. state, throughout Canada and overseas are sponsored by friends and family to play games for 24 hours, although this year’s event featured 25 hours of play thanks to the time change. Funds raised go directly to the Children’s Miracle Network Hospital of the player’s choice and nearly all donations are collected through the secure extra-life.org website. On Nov. 2, at 12 p.m. Eastern Time, extra-life.org crashed. The site’s technology provider DonorDrive said the site suffered a Distributed Denial of Service (DDoS) attack.

“Extra-Life.org was the victim of attacks throughout and after the 25-hour event, taking it down intermittently,” said Todd Levy, managing partner at DonorDrive.

Levy said a DDoS attack is basically when vandals overload a network by sending loads of web traffic to a site, causing it to become inaccessible.

DonorDrive’s Levy confirmed all personal data associated with the site, including credit card information, is safe and was never in jeopardy.

“What happened to extra-life.org was not caused by a "hack" or any compromise to security. A DDoS attack is like being stuck in a big traffic jam, not like having your car stolen. All personal information on the site was and continues to be safe,” said Levy.

Despite the attacks, players set a record high fundraising total since Extra Life was started in 2008 and also helped the program reach its highest engagements ever on its Facebook page and Twitter account, @extralife4kids. Adams said players had raised just over $2 million for this year’s event before Saturday and rallied to bring in another $1.7 million over the weekend.

Extra-Life.org is accepting donations for member children’s hospitals through Dec. 31, 2013 and thousands more players have continued to sign up Monday. Adams confirmed an Extra Life make-up day will occur Saturday, Nov. 9 at players’ request. For all updates on the make-up day visit extra-life.org or the Extra Life Facebook page. Supporters can also donate to their local member hospital at Extra-life.org/donate.

Extra Life is in its sixth year and was created by Adams in 2008 to honor his friend, the late Victoria ‘Tori’ Enmon, a 15-year-old Children’s Miracle Network Hospitals patient who played video games during her battle with acute lymphoblastic leukemia. Since then, thousands of Extra Life participants have raised more than $7 million to benefit 170 Children's Miracle Network Hospitals in North America, mostly by playing video and tabletop games. The program’s previous fundraising record was in 2012 when it raised $2.1 million.

About Children's Miracle Network Hospitals
Children’s Miracle Network Hospitals® raises funds and awareness for 170 member hospitals that provide 32 million treatments each year to kids across the U.S. and Canada. Donations stay local to fund critical treatments and healthcareservices, pediatric medical equipment and charitable care. Since 1983, Children’s Miracle Network Hospitals has raised more than $4.7 billion, most of it $1 at a time through the charity's Miracle Balloon icon. Its various fundraising partners and programs support the nonprofit's mission to save and improve the lives of as many children as possible. Find out why children's hospitals need community support, and learn about your member hospital, at CMNHospitals.org and facebook.com/CMNHospitals.