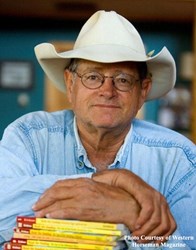 'It is exciting to watch them take Hank from the books and give him cinematic life.' - John Erickson Author, Hank the Cowdog

Hank the Cowdog, hero of 62 books and a favorite of kids for more than 30 years, is now in development as a full-length animated feature. Pre-production is well underway, with storyboards having been completed and the animation team now at work modeling the 3D characters. A teaser trailer is in production and should be ready by the end of the year. Hank is expected to be sniffing out crime in theaters by Easter 2015.

To carry out the transition of Hank the Cowdog from literary to multimedia icon, best-selling author John Erickson has formed HTC Entertainment headed by Ralph Boral, company CEO and Hank the Cowdog Producer. HTC will have the rights to produce feature films as well as create other brand extensions, such as video games and toys. All will showcase the exploits of that self-appointed head of ranch security, Hank the Cowdog, along with the other well-known characters of the book series such as Drover, Pete the Barncat, Little Alfred, Slim Chance, Sally May, and High Loper.

“We are bringing together some of the most innovative and creative talents in the business,” John Erickson said. “It is exciting to watch them take Hank from the books and give him cinematic life.”

Mark Erickson, HTC board member and co-author of the Hank screenplay, touts the richness of the Hank universe. “The characters are all based on what my father has observed during his lifetime as a working cowboy and ranch owner. Fans can identify with the tales. That is why they are so loved. And there is no end to the exciting and entertaining stories that can be told.”

Ralph Boral says the goal of HTC Entertainment is to create movies and develop properties that speak to families. “In addition to our good buddy Hank, we are already looking at several known properties that would translate well to the screen and will resonate with the fans of Hank and our investment partners.”

Hank has been in demand by several major studios, according to Gary Rinker, Erickson’s long-time business partner and HTC board member. “We have fielded offers from some of the biggest names in Hollywood over the years, but we have turned them down. We are firmly committed to making a film that keeps to the values that make Hank so special to our readers. HTC is uniquely qualified to achieve that goal.”

The project has completed storyboards and the animation team is already at work on modeling the 3D characters. A teaser trailer is in production and expected to be ready by the end of the year. HTC is looking to have Hank in theaters in time for Easter 2015.

About John Erickson and Hank the Cowdog:
Since 1982, the M-Cross Ranch in the northern Texas Panhandle has been protected by its self-proclaimed Head of Ranch Security – Hank the Cowdog. Millions of readers have faithfully followed his comedic crime-solving adventures through 62 books. John Erickson’s canine sensation Hank the Cowdog made its debut in the pages of The Cattleman, and became an instant favorite. Erickson took $2,000 in borrowed money to create Maverick Books, based in Perryton, Texas, and published two of Hank’s humorous stories in its first effort, The Devil in Texas. Maverick Books (http://www.hankthecowdog.com) is still the publisher of Hank books and audios. There have been over eight million books sold in the Hank series and it has become one of the longest running children’s audio series ever.

Drawings and storyboards are underway

Merry Christmas from Hank and his friends!