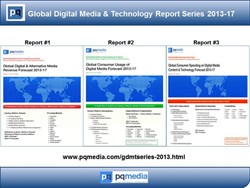 Driven by rapid advancements in digital technology, surging demand for mobile media and increased consumer exposure to media outdoors, global consumer-facing digital media is on pace to grow 12.3% to $1.22 trillion this year, according to new research from PQ Media. Consumer digital media spending is on pace to grow 11.9% to $963.1 billion in 2013, accounting for the lion’s share of the total media economy, although corporate digital media revenues will increase at a faster 13.6% rate to $256.7 billion.

Consumer time spent with digital media, meanwhile, will increase 11.8% globally to an average of 6 hours per week this year, according to the Global Digital Media & Technology Report Series 2013-17, a synergistic three-report set delivering the first holistic, cross-channel view of the world’s changing media economy. The new Report Series provides a compelling analysis of the tidal shifts influencing the global media ecosystem, as consumers transition away from traditional media to digital media and technology to engage with news, information and entertainment content.

“Key market indicators point to the consumer-facing media economy reaching the digital media tipping point in 2015,” said Patrick Quinn, CEO of PQ Media. “By the end of 2015, we expect consumer digital media spending and corporate digital media investments together will grab a 51% share of the global media economy.”

While a seminal event, the actual digital media tipping point is only the beginning of a new era for the global media economy. Combined digital media operator revenues and consumer digital media spending will grow at a compound annual rate of 11.5% worldwide in the 2012-17 period, while consumer media usage will rise at a 10.7% CAGR in the same timeframe, according to PQ Media.

Strong end-user adoption of advanced broadband, telecommunications and smart technology products and services has led to more mobile and elusive consumers spending increased time outside their homes engaging with digital media. At home, multitasking with various media and technologies is the norm in developed countries like the US, the UK, and Australia.

Meanwhile, the emerging middle class in developing nations, such as Brazil, Russia, India and China, are demanding faster access to richer content through upgraded broadband and wireless systems, fueling the growth of time and money spent on mobile data plans, internet access and over-the-top video. Surging demand from post-Baby Boomer generations for digital media content, access and devices is hastening the shift of advertising and marketing dollars to digital media.

“This development highlights the link between increased consumer spending on new media and the subsequent growth in consumer usage of those media," Quinn said. "The end-result is a shift in brand marketer dollars to the new media garnering the additional time and attention from target consumers."

Meanwhile, global consumer-facing traditional media revenues and spending are pacing for a 2.3% uptick in 2013 to $1.39 trillion, as the economic recovery and improving confidence in key markets offsets the lack of major worldwide sporting events or political campaigns. Traditional media usage will inch up 1.3% to 38.4 hours per week, according to PQ Media.

Overall digital and traditional media revenue and consumer spending on all media combined is projected to increase 6.7% this year to an aggregate $2.62 trillion worldwide. The US will remain the largest digital media market at $272.6 billion in 2013, while Australians will log an average of 17.2 hours per week of digital media engagement, the world’s highest weekly average.

For a detailed overview of the PQ Media Report Series download a free, data-filled Executive Summary of the Series by clicking through the hyperlink above. For specific report information or to purchase online, click through one of the report hyperlinks that appears on the landing page after you click through the preceding link. There are free downloads of executive summaries, table of contents, and sample datasets from each report.