The Custody of the Holy Land and FFHL Joins with the Mount Zion Foundation in Promoting Peaceful Co-Existence Between Christians, Muslims and Jews 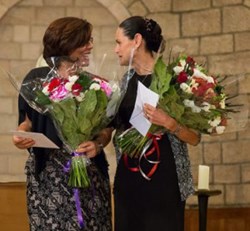 The goal is co-existence, and building positive relations.

(fmc-terrasanta.org) Pierbattista Pizzaballa, Custos of the Holy Land and Chairman of the Franciscan Foundation for the Holy Land (FFHL) recently attended the presentation of the prestigious Mount Zion Award to two worthy recipients: a Jewish woman studying Christianity and a Christian woman studying Judaism.

Visca Harani grew up in Jerusalem as a member of a traditional observant Jewish family. She studied at Tel Aviv University where she focused on Christianity in the Holy Land with a special interest in Eastern churches. She is an educator and consultant on Christian affairs with, among others, the ministries of Israeli Public Affairs, Security, Religions, and Tourism.

Margaret Karram is from a Palestinian Catholic family in Haifa. She received her Bachelor’s degree in Jewish Studies from the University of Judaism, Lee College, in Los Angeles, California. She has worked with the Focolare Movement for more than 30 years, and in 2001 was appointed as their delegate in Israel and the Palestinian Territories. The movement was established in 1943 in Italy to promote unity and universal brotherhood among all religions.

In 1989, Harani began work on inter-religious programs that enable Jews to study Christianity, and 10 years later, she launched a unique initiative aimed at bringing Arab children from the Old City of Jerusalem together with Jewish children from Tel Aviv for the express purpose of helping Jewish, Muslim and Christian children to share and understand what they have in common as well as what their differences are.

Growing up, Karram became increasingly aware of the common humanity shared by Christians and Jews, believing that both are bound as children of one creator despite religious differences

Pizzaballa applauded the work of the Mount Zion Foundation and the two women honored this year, pointing out that the Middle East is a place where Muslims, Christians and Jews have long lived together, sometimes in harmony but often with difficulty.

“The solution to difficulties,” he said, “is not integration, which doesn’t work because of the real differences between the religions and cultures.” The goal, he added, “is co-existence, living together with others who have their own identity, and building positive relations with them.”

The Custody of the Holy Land refers to the Franciscans of the Order of Friars Minor, who were commissioned by the Church in the 13th century to protect the Holy Places in the Holy Land in the name of all of Christianity.

The Custody not only cares for the Sanctuaries of brick and mortar, but also the “living stones” of the Holy Land, that is the believers and local Christian communities that live in difficult conditions in the Holy Land.

Pizzaballa explains, “In all the countries of the Middle East in which the Custody is present, the Christian communities are a tiny minority compared to Muslims or Jews (they currently constitute less than 2% of the population).” The extremely difficult situation created by the Arab-Israeli conflict has led to a serious exodus of the local Arab Christian population. All things give rise to unusual problems, but the Franciscans are committed to doing their part in creating a situation of respect for all of God’s children.

In conjunction with this, the Franciscan Foundation for the Holy Land was founded in 1994 as an arm of Custody of the Holy Land with the purpose of providing needed support for humanitarian programs that enable Christians to stay in their homeland. This is accomplished through various fundraising efforts.

Pizzaballa says of the Friars, “We live simply, like poor people, always in contact with people… and we seek out dialogue with the Islamic community as well as the Jewish community, in a style that is sometimes argumentative but always fraternal and free.”

The Mount Zion Award was established in 1986 by Fr. Wilhelm Salberg of Essen, Germany, the son of a Jewish father and a Christian mother, in recognition of the 1965 Vatican II document, Nostra Aetate, which announced a new attitude of respect by the Latin Church toward Judaism, Islam and other religions.