Food for the Hungry Distributes Food to Typhoon Haiyan Survivors

Food for the Hungry continues ongoing distributions of two-week food supply packages per family to thousands of families. 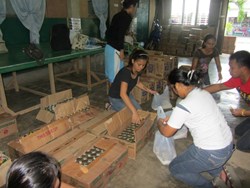 Food for the Hungry (FH) is leading aid efforts in the hardest hit areas in the Philippines to bring life-saving supplies to isolated and vulnerable Filipinos after Typhoon Haiyan destroyed entire communities, affecting 11.3 million people. With 4,000 reported dead, more than 700,000 Filipinos are displaced and in need of help.

Many relief initiatives have been stifled due to destroyed roads. With staff already on the ground when the storm hit, FH responded immediately, searching for survivors to bring them needed support. FH started distributions of two-week supplies of food per family last week and continues this week.

On November 18, FH distributed food packages to thousands of families in the affected region - both in Basay and Marabot. FH distributed more than 12,000 lbs of rice, 8,000 cans of sardines, and 8,000 packages of noodles to families.

At the end of the week, FH will distribute two-week food supply packages to another thousand families.

Visit fh.org/storm to give to FH’s work in this continuing response to typhoon survivors.

Founded in 1971, Food for the Hungry provides emergency relief and long-term development programs with operations in more than 20 countries to help the world's most vulnerable people. Learn more by visiting http://www.fh.org. Social connections include http://www.facebook.com/foodforthehungry and http://www.twitter.com/food4thehungry.