A bipartisan majority of those surveyed said they wanted all children in their state to have health care coverage. 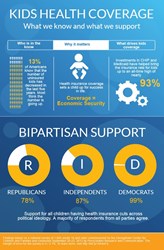 Investing in our children's health today helps create a strong workforce for tomorrow.

A new Georgetown University Center for Children and Families (CCF) report found that the uninsured rate for children continues to decline, while most Americans think the rate is increasing. A national survey by PerryUndem Research and Communications commissioned by the research center found that most Americans believe the last five years have negatively affected children. Specifically, majorities of survey respondents believe the number of children who are uninsured and living in poverty has increased during this time period.

“It’s understandable given the slow economic recovery that people would assume that more children are becoming uninsured,” said Joan Alker, executive director of the Georgetown University CCF. “But Americans are largely unaware that behind the scenes, Medicaid and CHIP are working to reduce the number of uninsured children.”

Reducing the number of uninsured children is important to Americans. The survey found nine in ten Americans want all children in their state to have health coverage.

“Medicaid and CHIP are examples of federal-state partnership programs that work,” said Alker. “Together they have successfully driven down the uninsured rate for children to historic lows and are a testament to what states can accomplish when they lean in and work with the federal government to meet the needs of their families.”

“The lag in these regions shows us that while we have made tremendous progress overall, our work is not done,” said Alker. “It’s important for national and state leaders to continue their commitment to covering kids. Investing in our children’s health today helps create a strong workforce for tomorrow.”

The Georgetown University Center for Children and Families (CCF) is an independent, nonpartisan policy and research center. The full report is available at http://ccf.georgetown.edu/.