While Tokyo and Kyoto are noteworthy destinations for the majority of US travelers, the Japan National Tourism Organization in New York has introduced Kyushu as the next must-see destination. As the cultural crossroads of East Asia, and as the first settlement of early Europeans, Kyushu is extraordinarily rich in culture and nature and the remarkable cultural experiences and exception train services offered in Kyushu were officially introduced to the US travel industry. 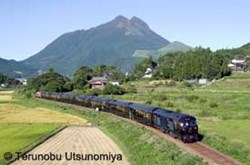 The Seven Stars in Kyushu

With the news about the launch of Japan’s first luxury sleeper train service, the Kyushu’s name became more visible than ever before. The Consulate General of Japan in New York and Japan National Tourism Organization (JNTO) invited editorial and tourism industry professionals to an event showcasing the region of Kyushu on November 14, 2013. The event introduced Kyushu from different perspectives of interest – history, tourism attractions, geographic diversity and culinary traditions. The event also featured specialists who spoke on Kyushu’s attractions in depth, including the long-time Frommer’s Japan guidebook author Beth Reiber, who briefed the audience on highlights of Kyushu’s landmarks and history. Stephen Lyman, a researcher of Kyushu’s regional liquor shochu, lectured on the culture of shochu.

Mr. Lyman clearly differentiated shochu from Japanese sake with ingredients and the processing methods, which are strongly associated with regional climate and geographic characteristics. For the very authentic experience of shochu, a shochu promotion company in New York Zation invited six Kyushu local shochu distillers to the event, serving their top of the line labels to the attendees.

In addition, the discussions also included tidbits on Kyushu’s regional tradition, craftsmanship, pottery pieces at the national treasure level, and premium quality of food. Each one of these exceptional extraordinary attractions was also introduced in the introduction of the “Seven Stars in Kyushu,” the newly launched luxury sleeper trains in Kyushu. With only fourteen suites on board, each room is carefully designed using the finest products of Kyushu, such as the Arita pottery ware basin on the vanity, local Oshima-Tsumugi fabric for the chair cushions, local premium cedar wood walls, and elaborate wooden fixtures crafted in the region’s traditional style from centuries ago. Meals are prepared with local premium ingredients, served in actual art pieces created by renowned artists in the country. The Seven Stars train travels to several magnificent tourist spots such as the hot springs area in Yufuin, the dynamic volcano known as Mt. Aso, the Southern coastal town of Miyazaki, the historic city of Nagasaki, and more.

Kyushu has been relatively overlooked as a tourist destination, and the event attendees were all surprised by the unique history and cultural richness of the region. In his opening remarks, Ambassador Sumio Kusaka noted that “Kyushu is one of the most beautiful countries,” and after the event discover that many participants from local editorial industry described Kyushu as “culturally inspiring,” “the hidden gem of Japanese cuisine,” and “unexpectedly colorful.” In the very first official introduction of the Seven Stars in Kyushu to the US market, the luxury sleeper trains earned special attention not only from journalists and editors, but also from luxury tour operators such as Remote Land, a New York based tour operator specializing in the luxury market. After being introduced as the exclusive luxury train in Japan, the tickets sold out immediately, and the US tourism industry was already eager to find out the ticket sales schedule for the US market in 2014. “The new luxury train is extremely interesting and perfect for the US luxury travelers, and we would love to get booking information for 2014,” says Ms. Victoria Hiller, the general manager of Remote Land, who attended the event.

Kyushu is one of the four major islands of Japan. Because of its southwest location near the Korean Peninsula and mainland China, the regional culture has stemmed from foreign cultural influences, including influences brought by the first Europeans who traveled to Nagasaki for international trade in the 17th century.

Suite room on the Seven Stars