With just two weeks left until the final sleep apnea awareness event of the year, Pro Player Health Alliance is continuing to make headlines with elite NFL greats continuing to join the team. 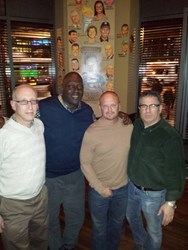 With just two weeks left until the final sleep apnea awareness event of the year, Pro Player Health Alliance (PPHA) is making headlines with elite NFL greats continuing to join the team. With juggernauts in the industry such as David Gergen, Executive Director of PPHA, Living Heart Foundation and Dr. Seltzer and Dr. Rein of Long Island Dental Sleep Medicine involved, the event on December 5th at the Long Island Marriott in Uniondale is expected to be the most publicized sleep apnea awareness event to-date.

Pro Player Health Alliance calls these events "Tackling Sleep Apnea," which are intended to raise awareness in the public about the deadly sleep disorder known as sleep apnea with testimonials from NFL greats. The idea behind the "Tackle Sleep Apnea" campaign is to get as many former professional athletes treated as possible through Pro Player Health Alliance, then those players partner with sleep specialists across the country to hold free public events. David Gergen, President of PPHA, say, "Since launching the campaign, we have helped get over 160 former players treated and spread the word to more than 1,000 people in the general public throughout the nation."

The PPHA events are perfect for individuals who want to learn more about sleep apnea, alternative treatment options to CPAP such as the oral appliance known as the Sleep Herbst and to hear genuine stories from American heroes who have experienced the same complications. Where else would you go to meet NFL greats and learn about sleep apnea from experts in the industry for free? As a fun twist, Pro Player Health Alliance holds a free raffle for registered attendees that include prizes signed by the players.

To learn more about The Living Heart Foundation, visit http://www.livingheartfoundation.org.

David Gergen, CDT and Executive Director of Pro Player Health Alliance, has been a nationally respected dental lab technician for over 25 years. He received the award for “The Finest Orthodontic Technician in the Country” given by Columbus Dental in 1986. He also has been appointed chair of the dental wing of the American Sleep and Breathing Academy a national interdisciplinary academy dedicated to sleep training and education with over 60,000 members. He has worked for some of the pioneers in the orthodontic and sleep dentistry fields. One of his proudest achievements is receiving The National Leadership award for Arizona Small Businessman of the Year in 2004.

The Pro Player Health Alliance (PPHA) is an organization dedicated to helping former NFL players, through providing testing and treatment options for those who suffer from sleep apnea. In addition, the PPHA is dedicated to integrating education and raising sleep apnea awareness, in a fun and memorable way. In addition to the campaign, the PPHA is dedicated to testing and getting people who suffer from sleep apnea treated. The PPHA was created by David Gergen, President of Gergen’s Orthodontic Lab and NFL legends.