Leaders from 50 countries began the annual conversation about international peace and security. 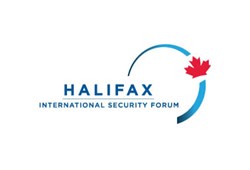 The Halifax International Security Forum is the place for democratic thinkers to join together and discuss the security challenges facing our nations.

Today, the most prolific thinkers on international security, decision-makers, military experts and writers joined together in Halifax, Canada to open the fifth annual Halifax International Security Forum, one of the most significant forums in the world.

Leaders from 50 countries, including Secretary of Defence Chuck Hagel, a large US congressional delegation led by Senators John McCain (R-AZ) and Tim Kaine (D-VA), Canadian Ministers Nicholson, MacKay, Baird and Blaney and over 300 participants from around the world began the annual conversation about international peace and security.

The Forum opened with remarks by Secretary of Defense, Chuck Hagel. Over the course of the weekend, the conference will feature eight on-the-record plenary sessions and 28 off-the-record sessions. On Saturday, November 23rd, David J. Kramer, President of Freedom House, will engage in a 30 minute one-on-one Halifax Chat regarding the state of freedom in the world with a special focus on Russia. In addition to international security discussions, Halifax is also known for its lobster dinner, a five kilometer run around the historic Halifax harbor and as a meeting place for bilateral discussions between representatives from around the world. The conference closes on Sunday, November 24th.

The Halifax International Security Forum is an independent, non-profit, non-partisan organization based in Washington, DC. The conference is made possible by the generous support of our sponsors, including the Government of Canada and the Halifax Canada Club.

A full list of participants and detailed agenda, as well as photos and videos from past years can be found on http://www.halifaxtheforum.org.

For more information about the Halifax International Security Forum please contact our communications team at: communications@halifaxtheforum.org