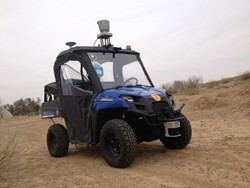 The winning vehicle, from the Beijing Institute of Technology

When the dust settled on China’s fifth annual Future Challenge earlier this month – pitting intelligent vehicles against each other on a course designed to test their capabilities -- Velodyne’s 3D LiDAR technology (http://www.velodynelidar.com) was on board all of the top eight finishers.

In all, eleven unmanned vehicles designed primarily by Chinese universities – and one South Korean institution -- competed in the challenge, in Changshu, Jiangsu Province. The race was organized by the National Natural Science Foundation of China (NSFC), as part of its Cognitive Computing of Visual and Auditory Information initiative.

Vehicles were put through both suburban and urban road tests, over a 23-kilometer course. Cars on the course needed to demonstrate the ability to recognize light, eliminate human and vehicle interference, successfully detour around construction zones, turn around and come to a stop. All were also required to establish the ability to make a U-turn, accelerate and decelerate. Performance was graded on a "4s" scale: safety, smartness, smoothness and speed.

"This is simply a remarkable accomplishment," said Wolfgang Juchmann, PhD, Velodyne LiDAR Director of Sales and Marketing. "The Future Challenge course was nothing less than demanding throughout, with terrain and tests that demonstrated LiDAR’s versatility and reliability in real time. And the fact that eight of eleven vehicles were so equipped stands as a huge vote of confidence in our technology."

Founded in 1983 and based in California’s Silicon Valley, Velodyne, Inc. is a diversified technology company known worldwide for its high-performance audio equipment and high-definition LiDAR sensors for autonomous vehicle applications. The company’s LiDAR division evolved after founder and inventor David Hall competed in the 2004-05 DARPA Grand Challenge using stereovision technology. Based on his experience during this challenge, Hall recognized the limitations of stereovision and developed the HDL64 high-resolution LiDAR sensor. More recently, Velodyne has released its smaller, lightweight HDL 32E sensor, available for many applications including UAV’s. Since 2007, Velodyne’s LiDAR division has emerged as a leading developer, manufacturer and supplier of high-definition LiDAR sensor technology used in a variety of commercial autonomous vehicle applications, including 3D mapping and surveying. For more information, visit http://www.velodynelidar.com.

Beijing Institute of Technology vehicle, cruising down the highway