The Johnson Award, which was presented to Dr. Polansky, Chief Engineer, Conventional Prompt Global Strike Programs, Sandia National Laboratories, on October 23 at the Kossiakoff Center in Laurel, Maryland, is given in recognition of outstanding personal technical achievement resulting in significant contribution to precision strike systems. 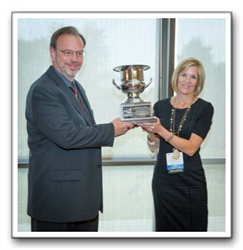 Dr. Polansky’s contributions are many and their impact has certainly been felt in the precision strike community, and by the warfighters who defend the U.S.

Dr. Polansky’s contributions are many and their impact has certainly been felt in the precision strike community. As an example, Dr. Polansky’s successes are key elements that have led military warfighters and DoD leaders to actively pursue the development of hypersonic boost-glide weapons for the U.S. inventory.

In the mid-1980s, Dr. Polansky pioneered the development of aerodynamic and aerothermodynamic analysis tools that became the standard at Sandia National Laboratories for maneuvering hypersonic systems. These tools enabled rapid analysis of complex systems and served a critical role in a number of successful flight tests in the late 1980s and 1990s. After more than 25 years, these tools remain in routine use at the laboratory.

For the last decade, Dr. Polansky has provided Sandia National Labs with technical and management leadership of hypersonic flight systems and hypersonic delivered warhead systems for NASA, DARPA, Air Force, Navy, and Army applications. He led the development and rocket sled track testing of Kinetic Energy Projectile (KEP) warheads at hypersonic speeds for the Navy. These successful tests demonstrated the lethality of the concept in a prototypic configuration and established the technical basis for the decision to baseline KEP warheads as the primary warhead for the first generation of CPGS systems. Dr. Polansky also led the technical team that conducted sled track tests of an advanced fuze for high-speed penetrators. He was instrumental in developing new rocket sled/payload separation technology that enabled the longest ever free flight of a separated vehicle to target impact. Although the newly developed fuze did not function as intended, the test was groundbreaking in terms of delivering precise conditions for the prototypic test of the high-speed penetrator in its delivery vehicle.

The culmination of Dr. Polansky’s last decade of work in hypersonic boost-glide systems was the highly successful Advanced Hypersonic Weapon flight test on November 11, 2011. As the Sandia Labs Advanced Hypersonic Weapon technical program manager, he led a multi-disciplinary team that demonstrated the first hypersonic boost-glide flight at a range relevant to the DoD Conventional Prompt Global Strike program. Launched from the Kauai Test Facility in Hawaii, the glide body flew approximately 4000 kilometers at hypersonic speeds in the upper atmosphere across the Pacific Ocean to a precision land impact near Illeginni Island in the Kwajalein Atoll, achieving all test objectives.

The National Defense Industrial Association (NDIA) is America’s leading Defense Industry association promoting national security. NDIA provides a legal and ethical forum for the exchange of information between Industry and Government on National Security issues. NDIA members foster the development of the most innovative and superior equipment, training and support for warfighters and first responders through our divisions, local chapters, affiliated associations and events.

About The Precision Strike Association

Advancing the art and science of precision engagement concepts and technologies is the mission of the Precision Strike Association. Members focus on the Kill Chain by supporting the development of systems and procedures to find, fix, track, target, attack, and assess fixed, moving, and relocatable targets. Community stakeholders have directed the association since its founding as the Cruise Missile Association in 1988. In 2001, it became an affiliate of the National Defense Industrial Association (NDIA), a non-profit educational association that represents all facets of the defense and technology industrial base and serves all military services.