E-books are notoriously touchy with equations, with no solution working well for all e-readers. Indie publisher Bitingduck Press offers something for everyone with its new release, Truly Tricky Graduate Physics Problems, which is available in several different formats to provide static or interactive math. 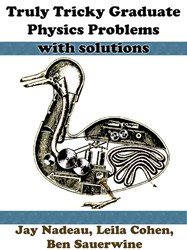 Studying for quals made easy.

Designed for junior/senior physics undergraduates and graduate students studying for qualifying exams, Bitingduck Press's new "Truly Tricky Graduate Problems in Physics" features 184 of the most diabolically clever problems in classical mechanics, special relativity, quantum mechanics, statistical mechanics, and electricity and magnetism that the authors could find. Many of the problems come from original articles in the literature by giants of modern physics, with references provided to original sources. All of the problems are solved in painstaking detail by physicists who have been there.

The book is typset as an epub file with MathML. Because most e-readers do not yet accept this format, Bitingduck Press offers several options to make use of the book as convenient as possible to everyone. The original epub and a printable pdf are available today from the press's webstore. The e-pub may be read on readers that support MathML, such as Calibre, Azardi, and Readium. The file also contains instructions for unzipping the epub file into individual html files, which may be read on browsers such as Firefox.

One of Bitingduck's goals was to make the equations in the book interactive, that is, able to be cut and pasted into other applications such as word processors or equation solvers. In browsers or readers that support MathJax, this is possible using the e-pub version of the book, so this version is recommended for anyone who wants these capabilities. The authors encourage readers to edit the files, use the equations in any way they wish, and submit suggestions and errata.

Over the next few days, the book will become available though major e-book distributors in a variety of formats. The Apple store will carry the iBooks author format, which supports MathML. Versions for Kindle and Nook will become available through Amazon, Barnes & Noble, and Kobo, with the equations expressed as images. This will provide a convenient reading experience, but without interactivity.

The authors are scientists and educators who love physics problems but who had to study for their quals in a purely analog fashion. First author Jay Nadeau (PhD Physics, Minnesota 1996) is a professor of Biomedical Engineering who has written a previous textbook intended for physicists learning biology, Introduction to Molecular Biophysics. She is a member of the Center for Medical Education at McGill University and of the American Association of Physics Teachers; her goals are to help biologists love physics and the other way around. Ben Sauerwine earned his PhD in Physics from Carnegie Mellon University in 2011. He was twice nominated for the Mellon College of Science's Hugh Young Graduate Teaching Award, and competed in the ACM ICPC World Finals in 2004. His postdoctoral research was in bioinformatics at Sage Bionetworks. He is now a software engineer at Google. The MathML format comes from Leila Cohen, who completed a Bachelor of Science at McGill University in 2012. She is currently a first year medical student at McGill University.

Nadeau is also a founding editor of Bitingduck Press, an independent publisher established in 2012 that has grown to represent over 75 authors and 150 books, with a particular focus on science and the lives of scientists. With a staff of 3 physicists, a technical writer with over 40 years' experience, and a graphic designer, the press aims to take advantage of all of the emerging possibilities of e-books, from mathematics to music. Publishing both fiction and nonfiction, Bitingduck Press will feature Young Adult books in 2014 and Hard Sci-Fi in 2015. The press is currently closed to fiction, but accepting proposals for both textbooks and narrative nonfiction. Submissions guidelines may be found on the publisher's website.