Mike Mitchell's photographs, which capture the Beatles first American concert performed on February 11, 1964, remain on display and for sale at David Anthony Fine Art, Taos New Mexico throughout 2014. 2014 is the 50th anniversary of the Beatles first appearance in America. 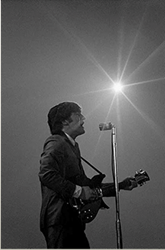 "Taos has been an international art center since the turn of the century, renowned for its creative energy and light, and so it really is fitting that Mike Mitchell chose to exhibit these photographs here." –David Mapes, David Anthony Fine Art

Mike Mitchell's photographs of the Beatles 1964 inaugural United States concert in an exhibition entitled “Heading for the Light,” will remain on view and on sale at David Anthony Fine Art in Taos throughout 2014. February 2014 marks the 50th anniversary of the Beatles first concert in America, which took place on February 11, 1964, at the Washington Coliseum. Mitchell, then 18-years-old, had been granted a press pass to the concert but had no flash available for his camera and therefore was forced to use existing light. Some of the resulting negatives, taken with low ambient light, were barely readable until the advancement of technology allowed their full realization. Today, Mitchell's dynamically nuanced images are appreciated for their artistic merit and historical significance.

The 19 limited edition prints of the Beatles are the first series of Mitchell’s Beatles photographs shown since the 2011 Christie’s auction, “The Beatles Illuminated: The Discovered Works of Mike Mitchell,” which consisted of a one-of-a-kind edition that achieved more than $360,000 when auctioned. This Taos exhibition is the first time the photos have been exhibited and on sale since the New York auction. Prices for the prints start at $2,000 and range to $34,000.

“These photos are being exhibited far from where there were taken,” said David Mapes, owner of David Anthony Fine Art, “but Taos has been an international art center since the turn of the century, renowned for its creative energy and light, and so it really is fitting that Mike Mitchell chose to exhibit these photographs here,” he added.

Additional works by Mike Mitchell that are part of “Heading for the Light” include 14 photographs from his series “Lumi-Gnosis,” which focus specifically on light forms and reflections. “Lumi-Gnosis” continues Mitchell’s exploration of the emotive power of light, also seen in the Beatles series.

Mitchell captured prolific portraits of the Beatles as a whole and as individuals. Instead of defining phography as a frozen moment in time, Mitchell likes to point out photography is actully the freezing of light. Each series “Lumi-Gnosis” and “Heading for the Light” speaks to the viewer through light. “I sense that light is what I call ‘alma-genic,’ alma being the Spanish word for soul. When we listen to light, it will grow the soul the way it grows a plant,” says Mitchell. As we begin to look at photography as converting light into matter, Mitchell points out, the art of photography becomes a whole new territory of art form.

These photos represent a defining moment in American pop culture and are a medium that enables art lovers an accessible way to collect art, with prices starting at $2,000. In a New York Times article about collecting photography, Jen Beckman, New York Gallery owner points out that, "Everyone has a fluency in photographic images because we're so immersed in them all the time." Photographs can offer an intertwining of an existing collection or a molding of space and art. Photography caters to various budgets and interests. “Lumi-Gnosis” and “Heading for the Light” both look and speak to their audience through light, drawing a viewer in with curiosity.

David Anthony Fine Art, (DAFA), located at 132 Kit Carson Road, Taos, New Mexico, was founded by long-time Taos furniture maker David Mapes in 2011. Each year, the gallery hosts the DAFA Photography Invitational showcasing photographers from throughout the world. The mission of DAFA is to exhibit the work of accomplished fine artists and exceptional crafts people in a setting that is welcoming and accessible to all.