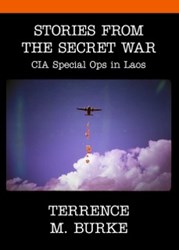 Stories From the Secret War

There is something to be said for being paranoid when you are the lone CIA paramilitary officer behind enemy lines within a few miles of both the Chinese and North Vietnamese borders.

Narrated by Michael Pearl, “Stories from the Secret War” provides a riveting account of the events in the mountains of Laos before the actual start of the Vietnam War. In the early 1960s, Terrence Burke, along with a handful of fellow CIA paramilitary officers, led a secret war in the mountains of Laos against North Vietnamese and Lao Communist forces. Burke’s recollections include deadly hit and run missions against the North Vietnamese (who were purportedly not even in Laos), attempted rescues of downed pilots and the challenge of daily survival while far from American support.

Regarding his survival instincts Terry points out, “I had slept, as usual, in my fatigue jacket and trousers with my jungle boots on and laced. I pulled several bandoleers of ammunition over my shoulder, shoved grenades in my jacket pocket, and checked the .38 caliber Smith & Wesson that rested in the shoulder holster I had also worn while sleeping. There is something to be said for being paranoid when you are the lone CIA paramilitary officer behind enemy lines within a few miles of both the Chinese and North Vietnamese borders.” In fact,Terry proved such a nuisance that he was actually the target of a North Vietnamese kidnapping attempt.

When he reported back to the CIA headquarters at Langley, he was awarded the CIA Intelligence Star for Valor presented by then Agency Director Admiral Raborn and Deputy Richard Helms. At that time only 16 medals had been given out since the Agency’s inception in 1948 and the previous medal had been awarded to U-2 spy plane pilot, Gary Frances Powers, after his return from captivity in the Soviet Union. Terry currently resides in Durango, Colorado.

“Stories from The Secret War” is currently available as an mp3 CD, as a download on select web sites and will soon be available on all popular download sites, including libraries.

About Brook Forest Voices: a complete audio production studio located just west of Denver in Evergreen, CO, specializing in audiobook narration, production and publishing. BFV is designed to help large and small publishers, as well as authors, with all their audio needs. Publishers and authors wanting to learn more can visit http://www.brookforestvoices.com or contact Jaime Andrade, BFV Business Manager at 303-670-4145.