Alliance for Cancer Gene Therapy (ACGT) – a Stamford, CT-based non-profit devoted exclusively to treating and eradicating cancer with cell and gene therapies – has provided a $500,000 grant to combat glioblastoma, one of the most difficult types of brain cancer to treat. Visit http://www.ACGTFoundation.org. 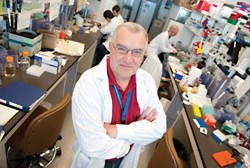 Alliance for Cancer Gene Therapy (ACGT) – a Stamford, CT-based non-profit devoted exclusively to treating and eradicating cancer with cell and gene therapies – has provided a $500,000 grant to combat glioblastoma, one of the most difficult types of brain cancer to treat. The funding, born out of the organization’s 20th grant cycle, offers tremendous hope to late-stage brain cancer patients and also pushes ACGT toward a landmark $25 million awarded in grants.

The half-million dollar "2013 Investigator’s Award in Clinical Translation of Cell and Gene Therapy for Cancer Research" grant has been awarded to John Bell, Ph.D., Senior Research Scientist and Professor of Medicine at the Ottawa Hospital Research Institute in Canada. Dr. Bell has worked extensively with oncolytic viruses – man-made viruses that target only cancer cells, and spare patients the harrowing side-effects of chemotherapy or surgery – and has discovered the enormous promise they offer in the war on cancer.

Dr. Bell and his team have uncovered a new oncolytic variant – the Chimeric Maraba virus – that has had success in treating human glioblastomas in mice. With ACGT’s generous grant, Dr. Bell will further explore the potential of Chimeric Maraba, design and manufacture it, and begin Phase I human trials to establish safety and efficacy.

Dr. Bell was awarded the grant after a very competitive application process. ACGT received 48 letters of intent, which were pared down to 13 full applications, then reviewed by peers and ultimately selected by its preeminent Scientific Advisory Council.

ACGT’s commitment to funding breakthrough gene therapy comes at a critical time, when sequestration and budget cuts have stifled National Institutes of Health grants and support. ACGT enables philanthropists, cancer researchers and doctors to join hands for a common goal.

Established in 2001, ACGT (http://www.acgtfoundation.org) is the nation’s only not-for-profit exclusively dedicated to cancer cell and gene therapy treatments for all types of cancer. One-hundred percent of contributions go directly to research. ACGT has funded 42 grants in the U.S. and Canada since its founding in 2001 by Barbara Netter and her late husband, Edward, to conduct and accelerate critically needed innovative research for all types of cancer. ACGT’s Scientific Advisory Council is comprised of 16 of the nation’s most distinguished physicians and researchers in cell and gene therapy, who thoroughly review all grants. Since its inception, ACGT has awarded 27 grants to Young Investigators and 15 grants to Clinical Investigators, totaling $24.2 million in funding. Barbara Netter, as President, together with other members of the Board of Directors, are fully committed to ACGT’s continued support of this research. ACGT is located at 96 Cummings Point Road, Stamford, CT 06902.