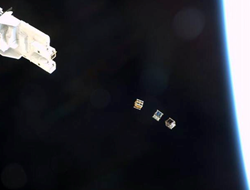 A pair of diminutive cube satellites weighing no more than a few pounds were deployed last week from the International Space Station with hopes to usher in a 21st century revolution in education.

Secondary school and College students across the country will have the ability to use the satellites in curriculum focused on Science, Technology, Engineering, and Mathematics (STEM). The program provides students access to a dozen different sensors including a camera as they orbit 266 miles above the earth every 90 minutes.

"For high school students to be able to conduct their own experiments in space is simply mind blowing," says Tinh Tran, a science teacher at University High School. "Truly and literally, the world is now their classroom."

If they can raise the funds, the Science Club at Goleta Valley Junior High will be one of the teams joining University High and dozens of other schools programming the satellite early next year.

"It's a great opportunity for all the kids," says Kim Miller, the science teacher who runs the club. "STEM education is more than equations; we help students develop critical thinking while encouraging the creativity inherent in scientific questioning and observation."

Constructed by satellite company Nanosatisfi, Ardusat-X and Ardusat-1 are the first of a planned constellation of satellites that will work together gathering data for a fraction of the cost of a single traditional satellite. A third satellite is planned for launch in December 2013.

Education is changing across the US. Over the next few years many states will be implementing Common Core and Next Generation Science standards - standards that are largely based on practical, hands-on experiences to convey knowledge across Language Arts, and the STEM fields. Projects like Ardusat accelerate the change.

"Our mission at Einstein Middle School is to explore, discover and create," says Principal Garrett Kirkland. "The satellite program provides our faculty the opportunity to create lessons with science embedded in Common Core Units of Study and elevates the STEM programs we are able to offer our students."

Dozens of schools are fundraising to access time on the satellites. You can help them. Learn more about the ArduSat sensor arrays, and how you can help a school get to space by visiting http://magnitude.io/satellite-fundraising-schools/.

About NanoSatisfi: NanoSatisfi, situated in San Francisco, CA, democratizes access to space exploration, images and data by providing access to fully programmable in-orbit satellites for $250/week. Using an intuitive online interface, students aged 12 and up can program and control a satellite from the comfort of their classroom, or even their living room, developing experiments and applications to run onboard the NanoSatisfi satellites in space. By hiding the complexities of space, NanoSatisfi is bringing the wonder of space exploration to everyday individuals.