Elisa Contemporary Art has curated All About Pop, the first solo exhibit of Houston artist Mitch McGee. The exhibit opens on December 2 at 1stdibs at New York Design Center in New York City. 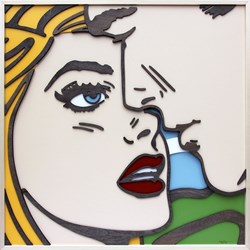 "I have always been fascinated with Pop Art and the ability of artists like Lichtenstein and Oldenburg to take everyday objects and make them fascinating.. I wondered how I could recreate one in another medium."

Elisa Contemporary Art has curated All About Pop, the first New York solo exhibit of Houston Artist, Mitch McGee at 1stdibs at New York Design Center. The exhibit opens on December 2, 2013. It will run through January 5, 2014. The exhibit will debut five just-created artworks.

Mitch McGee believes that, “We learn by using what we already know as a bridge over which we pass to the unknown. It is not possible for the mind to crash suddenly past the familiar into the totally unfamiliar. Even the most vigorous and daring mind is unable to create something out of nothing by a spontaneous act of imagination.” (credit: AW Tozer)

For McGee, that bridge for his artwork style was Pop Art. Although Pop Art began first in England in the early 1950s, it came to life in America during the 1960s and was officially named in December 1962 during the "Symposium on Pop Art" organized by the Museum of Modern Art in New York.

The influences for McGee's own artwork came from the style of Pop Art legend, Roy Lichtenstein. According to McGee, "Lichtenstein with a Red Bow was the first piece that started me down this rabbit hole. I have always been fascinated with Pop Art and the ability of artists like Lichtenstein and Oldenburg to take everyday objects we are bombarded with and make them fascinating. Roy Lichtenstein took comic strips and repositioned them as lithography. In an almost tongue-in-cheek fashion I wondered how I could take one of his pieces and recreate it in another medium. The easy answer for me was wood. I grew up working with it and, combined with my graphic design background, it left me with a new medium and expression that I think really works." From that start, McGee began to create his own style and establish his unique voice.

Today, his creativity exists in that space between painting and sculpture. In his Birch series, McGee uses pieces of wood, each illustrated, hand cut and stained or painted to create dimensional pieces. Each painting is filled with thick layers and subtle shadows. There is a warmth created by the imperfection of the birch and its grain that creates an emotional connection. Each painting is a labor of love, often taking 40 hours or more to complete.

According to McGee, "The most challenging part of the process is figuring out the layering. The piece changes from the original sketch a little as I go because what works on paper doesn’t always work three dimensionally. I want everything to stack up in a way that makes sense so, even if most of a layer is hidden, the edges need to match the layer on top of it."

McGee has created original works inspired by Superhero comics, Sports icons, as well as romantic moments using thick lines and bold colors to bring these scenes to life in his own way. Each artwork is filled with humor, irony, compassion or seduction.

McGee has exhibited his work throughout Texas since 2001 and in New York with Elisa Contemporary Art since 2012. This is his first New York solo exhibit. His work is public and private collections throughout the world. His artwork was featured in the March 2013 issue of Dwell Magazine.

Mitch McGee graduated from Baylor University in 1999 with a Bachelor of Fine Arts degree. He currently lives in Houston, TX with his wife and three kids.

Founded in 2007 by Lisa Cooper, Elisa Contemporary Art is dedicated to promoting the appreciation and collection of art as a way to enrich and heal our lives, our communities, and the world. The gallery opened in September 2008. Elisa Contemporary Art has participated in international art fairs in New York, Miami and the Hamptons, and curated over 12 public art exhibits in the Tri-State area. A portion of every gallery sale is donated to charities helping underserved children heal through art. We currently support Free Arts NYC, Arts to Grow and Art Therapy Outreach Center.

The New York Design Center and 1stdibs.com have joined forces to create 1stdibs at NYDC. This revolutionary gallery space provides 1stdibs with its first physical presence in the marketplace, and changes the dynamic of this once design-trade-only building into a progressive, all-inclusive design resource. An eclectic mix of over 54 1stdibs® dealers from all over the country, as well as several international dealers, occupy the entire tenth floor of the NYDC with 33,000 square feet of fine antiques and 20th-century design.

About the New York Design Center

Located at 200 Lexington Avenue, The New York Design Center is the industry’s premier resource for fine furnishings. Built in 1926 as the New York Furniture Exchange, the NYDC was the dream of visionaries in the furniture industry. Today, the New York Design Center’s rich history enhances its reputation as a respected resource for imaginative solutions to any design challenge. Representing avant-garde, contemporary innovations as well as classic creations, the NYDC is committed to remaining at the forefront of design. The Design Center houses over 33,000 square feet of antiques and 20th century design from 1stdibs® dealers as well as Access to Design™, a program that assists consumers in navigating the design process. To learn more, visit http://www.nydc.com.