Following the launch of Chang’e-3 lunar probe, the Camera Pointing System jointly developed by researchers of The Hong Kong Polytechnic University and China Academy of Space Technology is now getting closer for landing on the moon’s surface. 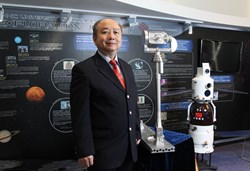 Following the launch of Chang’e-3 lunar probe in Xichang Satellite Launch Centre, the Camera Pointing System jointly developed by researchers of The Hong Kong Polytechnic University (PolyU) and China Academy of Space Technology (CAST) is now getting closer for landing on the moon’s surface. This sophisticated space tool which is carried on board of the spacecraft is the first Hong Kong-made and developed instrument being deployed for the country’s lunar exploration programme since its launch in 2007.

Joining this historical mission is Professor Yung Kai-leung, Associate Head of PolyU’s Department of Industrial and System Engineering, who is also an expert member appointed by China National Space Administration's Lunar Exploration Programme Centre for the third phase of China's lunar exploration programme. Professor Yung and his partner have a wealth of experience in making sophisticated space tools for different missions. These include the “Mars Rock Corer” for the European Space Agency’s 2003 Mars Express Mission, the Space Holinser Forceps for the then MIR Space Station, and the “Soil Preparation System” for the Sino-Russian Space Mission in 2011. All these space tools were made in the University’s well-equipped Industrial Centre.

China’s lunar exploration programme is broadly categorized into three phases by “Orbiting, Landing and Returning”. The first phase had already come to fruition, with both Chang’e-1 and Chang’e-2 satellites duly completing their mission. In the second phase, the Camera Pointing System developed by Professor Yung Kai-leung will be deployed for the current landing mission.

If the mission goes as planned, Chang’e-3 will first enter the orbit of the moon one day after the launch and then prepared for soft landing at 44.1° Latitude North of the moon, an area which is also known as Sinus Iridum or the “Bay of Rainbows”. After landing on the moon, the lander of Chang’e-3 will then release a rover for the exploration of lunar surface.

The Camera Pointing System developed by PolyU expert measures 85 cm (length) by 27 cm (width) and 16 cm (depth) and it weighs 2.8 kg. It was installed in the upper part of the lander and capable of moving vertically by 120 degree and rotating sideway by 340 degree to capture images of the moon as well as movement of the rover. This sophisticated space tool will be able to withstand the vast difference in temperature and function in one sixth of gravity on the moon. After the rover is released, the Camera Pointing System will come into operation together with other parts of the lander for lunar exploration.

PolyU has been working closely with CAST. In 2010, both parties signed a pact for the establishment of a Joint Laboratory in Precision Engineering for Space Applications. CAST also donated advanced space research equipment for the Joint Laboratory. In the third phase of China’s lunar exploration programme, Professor Yung will further collaborate with mainland experts to develop a “Surface Sampling and Packing System”.

Established in 1968 with the late aerospace scientist Qian Xuesen as its founding President, CAST is currently the most important research and engineering base for China’s space flight missions. It is an integral unit of the China Aerospace Science and Technology Corporation.