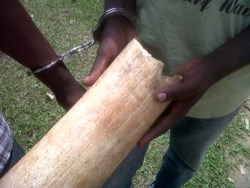 Tusks and Cuffs: Elephant tusk siezed in Republic of Congo

This is one of the most successful hauls of illegal trafficking criminals that PALF and The Aspinall Foundation have been involved in.

The Project for the Application of Law for Fauna (PALF) in the Republic of Congo has today announced one of their most significant operations against the illegal ivory trade. This week, an incredible total of four ivory operations supported by PALF (a collaborative organisation between The Aspinall Foundation, a UK based charity, The Congolese Ministry of Forest Economy and Sustainable Development and the Wildlife Conservation Society), have resulted in the arrests of eight people in these illegal wildlife trafficking groups - whilst more arrests are set to continue. This is one of the most successful hauls of illegal trafficking criminals that PALF and The Aspinall Foundation have been involved in. The major haul started with an enormous elephant tusk seized by PALF and a consortium of NGO’s in the Republic of Congo.

Another of the ivory hauls from a dealer in an international trafficking network included a sack full of sculpted ivory. Early on the 30th November, another dealer with sculpted ivory was arrested and most incredibly and later that afternoon, a 32-year-old Chinese national attempted to board an Ethiopian Airlines flight with ivory jewellery after bribing 60.000 FCFA (about $125 USD) to get it through to via ‘a fixer’ said Natafali Honig.

Naftali Honig, PALF Co-ordinator explained: “We acted fast on the tip-off about this Ethiopian Airlines passenger and within minutes his hand luggage was searched, we found nothing. Then after I tried to ask him about the ivory, we suspected that the illegal haul was in his checked luggage, which was at that time being loaded onto the plane. The rest of the passengers had already boarded the plane whilst we continued to question the passenger.”

After holding up the flight to find the unnamed passenger’s luggage, authorities were able to confirm that there was in fact a suitcase full of ivory on board the plane. A team of people from Eaux et Forêts working at Maya Maya Airport in Brazaville, the Departmental Director of the Lusaka Agreement Task Force and the National Gendarmerie ended up arresting the Chinese national and the person who facilitated the passage of his luggage for money.

This week has been a phenomenal success for the Congolese Ministry of Forest Economy and Sustainable Development and especially for the Gendarmerie Nationale, whose tirelessness throughout the week made this huge operation possible.

These seizes were conducted all over Brazzaville, in the morning, in the middle of the day and at night. Naftali Honig, the PALF Co-ordinator explained: “These are not easy cases – corruption attempts are rife and I was particularly moved when one Gendarme asked me and the PALF legal team to work extra hard to assure that these criminals are prosecuted and put into jail so that their hard work was not for nothing.”

Damian Aspinall, Chairman of The Aspinall Foundation said; “It is important for The Aspinall Foundation to continue to support vital work against illegal ivory smugglers. This week has been one of our most successful through PALF and also one of our most significant. The ivory trade is out of control and I personally feel that China needs to do more to help us all in the fight against this. I am incredibly proud of the collaborative efforts that continue in the Republic of Congo through PALF as they are making a huge difference, but there is still a long, long way to go in the fight against ivory trafficking.”

In China it is commonly thought that ivory possesses naturopathic benefits as well as a huge value placed on the ornamental market. The trade in ivory has soared on the back of the country’s growing wealth which is a disaster for wildlife. Earlier this year, China was one of the eight countries that submitted national action plans to combat illegal trade in elephant ivory. These plans were requested by the CITES Standing Committee in March 2012 as a response to the dramatic rise in the number of elephants poached for their ivory.