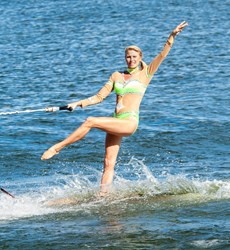 Orloff, of Winter Haven, Florida, will all be enshrined among the greatest legends of the sport at the 32nd annual induction ceremony set to take place on April 12th, 2014 at Fantasy of Flight in Polk City, Florida. The 2014 Award of Distinction Members will be announced this week.

"I am very excited and honored to be recognized as a show skier and to be a part of an elite group of athletes and extraordinary people who have worked so hard to promote the sport of water skiing," Orloff said.

Orloff began skiing in 1979 with the Brown’s Lake Aquaducks in Burlington, Wis. and continued at Marine World Africa USA and Cypress Gardens. Throughout her career, Orloff performed in ski shows and tournaments throughout the United States and across the globe. Her contributions both on and off the water did not go unrecognized by the water ski community.

At the same time Orloff was building a successful show skiing career, she also became a true innovator of her sport. Orloff revolutionized swivel skiing- accomplishing many first-time achievements, including the 720 overhead, 1080 overhead, 540 overhead to press and 1440 overhead. She also was the first to do a shoulder-to-shoulder handstand on water, and she was part of the first 5-tier pyramid and first 20-girl swivel ballet line.

Off the water, Orloff has dedicated her time to working with the National Show Ski Association in developing new judging systems for swivel and doubles, and has devoted countless hours not only to judging clinics, but also to swivel and doubles clinics, mentoring several national-caliber competitors.

“Our 2014 Hall of Fame inductee represents an extraordinary combination of athletic prowess, innovation and dedication at the highest level of our sport,” says AWSEF President Paul Chapin. “We’re proud to welcome Cheryl as an honored member of the AWSEF Water Ski Hall of Fame.”

The purpose of the Water Ski Hall of Fame is to honor and perpetuate the names and accomplishments of skiers, pioneers and officials whose dedication and competitive achievements at national and international levels have brought lasting fame to the sport of water skiing. Four categories of membership have been approved by the AWSEF’s board of trustees: competitive water skiers, including participants in traditional water skiing, barefoot skiing, ski racing and any other nationally competitive individual discipline recognized by USA Water Ski and approved by the AWSEF board of trustees; water skiing pioneers; water skiing officials; and show skiing. For eligibility requirements and more information, visit the official Web site of the AWSEF at http://www.waterskihalloffame.com.