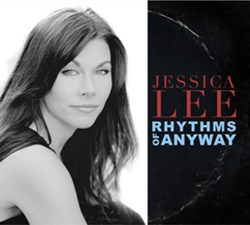 Jessica Lee’s new album, Rhythms of Anyway, gives voice to the up-lifting energy, power and messages that were the trademarks of early artists in gospel, blues and jazz.

As with her prior recordings and performances, Jessica Lee’s new album, Rhythms of Anyway, gives voice to the up-lifting energy, power and messages that were the trademarks of early artists in gospel, blues and jazz. Ms. Lee’s inspiration for this new project is a simple poem, Anyway, which hangs on the wall of a sick children's home in Calcutta, India, founded by Mother Teresa. The poem asks us to stay positive and to love and serve unconditionally regardless of the sometimes fear-based and negative actions and attitudes of others. This CD strives to help to provide the inspiration and energy to do what the poem asks.

The CD contains thirteen songs (10 album songs and 3 bonus tracks) with intentionally varying rhythmic influences, including jazz standards such as Nature Boy, Small Day Tomorrow and The More I See You; lesser-known selections such as Nocturne and Songbird; R&B-fusion songs such as Hallelujah I Love Him So and Baby Come to Me; and also three original songs written by Jessica, including, Love No Hands, which speaks of aspects of unconditional love; Whispering, which listens for the voice of inspiration and guidance; and One with the Skies (Song for Claire), which examines the value and eternal nature of each life, inspired by the short but full life of a young girl who valiantly fought cancer . The CD’s strong rhythms are powered by renowned jazz drummer Roger Humphries, who has worked and recorded with Ray Charles, Stanley Turrentine, Horace Silver and George Benson, among many other jazz greats. All musicians on the CD have a Pittsburgh connection, including co-producers Max Leake (keys) and Mark Strickland (guitar), Mike Houlis (bass), New York-based saxophonist Chris Hemingway (alto sax), and Jay Willis (soprano and tenor saxophones). Max Leake’s imaginative arrangements as lead Music Director and Producer are, by themselves, worth a listen.

The CD’s final three bonus tracks include You Don’t Know I Love You, written by Executive Producer, Roy Ruzika, many years ago for his wife Joan; and The World Medley which shares Max Leake’s original intro and outro arrangement of What the World Needs Now Is Love, which blends meaningfully with a soulful version of What a Wonderful World. Of special note is the final track, Raincoat, which is dedicated to the memory of renowned jazz musician John D'Amico, the arranger and pianist on Jessica's debut CD, Bluebird Fly, who recorded Raincoat with Jessica during his fight with cancer. Raincoat is only being released now - for the first time - after this highly regarded jazz pianist's passing.

Jessica Lee can be found on Facebook at facebook.com/JessicaLeeJazz. Rhythms of Any is available at cdbaby.com/jessicalee14 and other major online retailers.