Posey Obrecht ’09, a Garrison Forest Polo standout, was named the 2013 Intercollegiate Player of the Year by the Polo Training Foundation, one of the most prestigious awards given at the collegiate level in the sport. 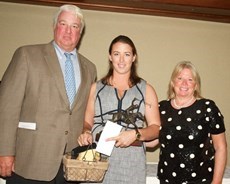 Posey personifies every quality that the award represents--skill, sportsmanship, dedication to the sport and much more.

Posey Obrecht ’09, a Garrison Forest School (GFS) Polo standout, was named the 2013 Intercollegiate Player of the Year by the Polo Training Foundation. In October, Posey, her family and Garrison Forest coaches and mentors, Cindy Halle (GFS Head Coach) and Emily Dewey (GFS Assistant Coach) were on hand in Houston for the ceremony. Posey, who played for the University of Kentucky’s Women’s team, embodies the criterion and values of the award.

“Posey personifies every quality that the award represents--skill, sportsmanship, dedication to the sport and much more--in addition to being one of the strongest women players in the country,” notes Ms. Halle. “When the University of Kentucky [UK] won the national championship in 2010, Posey, then a freshman, was the link that held it all together. In both the semi-finals and the final game, she was not put in until the second half when UK was behind. Her knowledge of the game, horsemanship and selfless play led her to score most of the goals for her team that year.”

Posey’s character off the field and her grit and determination have made all the difference on the field, inspiring her teammates, coaches and friends. In 2012, The Kentucky team was well on its way to be one of the contenders for the national title. During a game against Colorado State University, Posey had a horrific fall and sustained a fracture of the occipital bone at the base of her skull. “For three months, she was in a neck brace, effectively ending her playing season and the chances of a University of Kentucky national championship,” recalls Ms. Halle.

Despite her injury and the disappointment that it carried, Posey continued leading her college club and was instrumental in the regional tournament at the Kentucky Horse Park in March 2012. When it came time to get back on a horse, Posey, who was co-captain of the 2009 GFS Polo team, chose to do this at Garrison Forest, in the polo ring and with coaches (and polo ponies) she knew so well.

Her final season as a University of Kentucky player last spring was not a championship season, but Posey’s enthusiastic support and welcoming leadership buoyed a young team. The GFS connection continued in the last chukkar of her final collegiate game. Her team was playing the University of Virginia and GFS teammate Kylie Sheehan ’12 and UVA was dominating. “Instead of becoming frustrated with her teammates or upset that her last game would be a loss, Posey made it fun for everyone, chatting it up, laughing, teasing, simply soaking in her last collegiate college game, playing against Kylie, a close friend,” Ms. Halle explains.

University of Kentucky’s women’s polo program is student-led. From negotiating with coaches and finding new stabling for the polo ponies to soliciting donations and instructing less-experienced players, Posey was instrumental in the club’s success at every level. She acted as a mentor, arranging for junior varsity players to play against more experience players and organized weekend games.

While at UK, she managed several high school interscholastic polo tournaments for the United States Polo Association (USPA) and served as a mentor for Garrison Forest’s Middle Grades Partnership (MGP) “Introduction to Polo” program. MGP is a private/public school collaboration involving 18 public and private schools in the Baltimore region which provides provide comprehensive summer and academic-year learning opportunities for promising Baltimore City students. She served on the newly formed Student Athlete Advisory Committee for the USPA and was a volunteer coach at the UVA polo camp in summer 2013 and 2014.

“Posey has done all of this with a wry and self-deprecating sense of humor, with humility and poise, an incredible work ethic and a genuine concern for the ponies and her teammates,” says Ms. Halle. “She has done all of this because of who she is and because she truly enjoys the game of polo and all that it entails.”

With Posey’s experience working at Pimlico Race Track doing public relations work during the Preakness the past two years, as well as working at the Fasig-Tipton Thoroughbred Sales, Posey is hoping to put her Equine Science and Management degree from the University of Kentucky to work in the Thoroughbred industry.